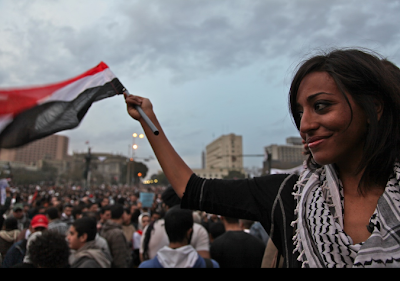 Most people will know that the 25th of January marked the day when Egypt sought the freedoms and liberties that its people had long yearned for. Protests starting in Cairo’s Tahrir Square quickly radiated throughout all of Egypt, revolutionary discourse having spread from the Tunisian Revolution nearby. The people at long last embraced the power of the masses and collectively engaged in political conversation on a range of issues – legal and political, in terms of corruption, rigged elections, restriction of free speech and police brutality; or economic, in terms of low wages, high unemployment, absolute poverty and food price inflation.

Weeks of protests and violent clashes between citizens and the police saw the resignation of the Egyptian President Hosni Mubarak on the 11th of February. Mubarak turned power over to the Supreme Council of the Armed Forces, headed by Mohamed Tantawi, marking a day of great celebration and a feeling of triumph over corruption and injustice in Egypt.

The 25th January Revolution was in essence a fight for self-government. The question is, “Have they now got it?” A significant proportion of the population is still feeling that the revolution continues through ongoing protests and strikes. The Army Council, viewing continued action as a threat to the stability of the nation, has carried out repressive measures to silence the protesters, one of which was to issue a law criminalising protest, enforceable as long as the Emergency Law is in place (which has been in fact been in place since 1981). This law shamelessly legitimises atrocious acts that deny freedom of expression, a right that was supposedly won in the revolution. The Army’s recent attack on Cairo University students and professors, who were calling for the removal of Mubarak-affiliated university officials, is deplorable. And with Amnesty International’s allegations of torture, including forced virginity tests, inflicted by the Army on women protesters and the detaining of peaceful protesters and strikers for trial in front of military tribunals, the answer to the question posed earlier is – “not just yet”.

The not-so revolutionary interim government, made up of a few of Mubarak’s old cronies, including Gen. Ibrahim who headed Mubarak’s ‘Technical Assistance Department’ in charge of surveillance and phone tapping, even made time to receive the Bahraini foreign minister, Khaled Al Khalifa, amidst the Bahraini struggle for democracy. All of these factors should lead us to question whether the Army was ever truly expressing genuine solidarity with the Egyptian Revolution.

So despite the majority of about 77% Egyptian voters being in favour of the new constitution, the disbanding of State Security Intelligence (SSI) organisation and trialing of a number of corrupt statesmen, such as that of Mubarak’s Interior Minister Gen. Habib el-Adly, accused of murdering at least 360 protesters during the Tahrir Uprising, the fight is not over. The very ideals which fueled the revolution are under attack, and it is up to the people of Egypt – the people who were in Tahrir Square, the men in the self-defense committees defending their homes and love ones, the women involved in the protests – to keep the struggle alive in their hearts, to protect Egypt from the hands of foreign and domestic forces who would love nothing better than to see it the revolution crushed.