Bradley Manning is a hero 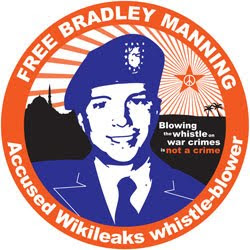 “I want people to see the truth.” -Bradley Manning

For the past ten months, the United States government, in its pursuit of the Global War on Terror, has been keeping Bradley Manning under lock and key in preparation for his trial. Accused of leaking classified government information, the 23-year-old Private First Class is a viewed as a hero by advocates of government transparency, and as a threat to freedom by those defenders of established interests who like to fret about “National Security”.

In recent months, disturbing facts about the conditions of Manning’s detention have come to light. His lawyer alleges that Manning has been subject to 23-hour solitary confinement and made to undergo torture techniques such as forced nudity and sleep deprivation. Manning, held in custody at a Marine Corps base, poses no threat to any person, or even to any “National Security”. He has not been convicted of any crimes. Yet daily he has to endure this punishment at the hands of the American security state. Why?

Officials at the Quantico base say that he is on “Prevention of Injury” watch, and that forcing him to stand naked for roll call at 5am in the morning is necessary so that he doesn’t attempt to hurt himself using his clothes. This is in spite of the fact that no one has declared Manning to be a suicide risk – indeed, the military’s psychiatrists have recommended that the Prevention of Injury restrictions be removed at least 16 times. One expert, Terry Kupers, has said that the conditions he is being held in make Manning more likely to become suicidal. There is no rational basis for the degrading and inhumane treatment this man has suffered.

It is becoming increasingly clear that the United States government wants this case to act as a deterrent to any future potential whistle-blowers. Manning is meant to serve as an example to all those who might consider similar actions in the future. Only recently, a State Department official was forced to resign after making comments critical of Manning’s treatment. The message is being sent loud and clear: “We will brook no dissent.”