Showing posts from January, 2011
Show all

Revolution in Egypt- Solidarity from Aotearoa

Stand in solidarity with the Egyptian people 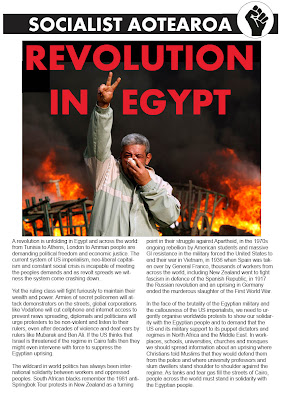 A revolution is unfolding in Egypt and across the world: from Tunisia to Athens, London to Amman people are demanding political freedom and economic justice. The current system of US imperialism, neo-liberal capitalism and constant social crisis is incapable of meeting the peoples demands and as revolt spreads we witness the system come crashing down. Yet the ruling class will fight furiously to maintain their wealth and power. Armies of secret policemen will attack demonstrators on the streets, global corporations like Vodafone will cut cellphone and internet access to prevent news spreading, diplomats and politicians will urge protesters to be non-violent and listen to their rulers, even after decades of violence and deaf ears by rulers like Mubarak and Ben Ali. If the US thinks that Israel is threatened if the regime in Cairo falls then they might even intervene with force to suppress the Egyptian uprising. The wildcard in world politics has always been international solidarity be
Post a Comment
Read more

Victory to the Egyptian Revolution- Auckland Protest today at 3pm

Protestors supporting the Revolutions in Tunisia and Egypt will gather later today at the US Consulate in Customs Street, Auckland at 3pm, in solidarity with the hundreds of thousands of people who took to the streets to overthrow their corrupt, Western backed governments. Egyptian democracy activist and protest organiser Mohammed Hassan, from Heliopolis in Egypt, said- "This is a time for solidarity and a time for unity. The people of Egypt are taking their country back with their own hands, and we as activists and as Egyptians feel that we need to be a part of this historic moment, and we give all we can, our voices." "The chants of the protestors in all areas of the country are echoing what has been in the hearts and minds of Egyptians for decades: the desperate need for change, democracy and freedom, and from the live broadcasts from within the country, we can see that the people do not have any intention of stopping until their demands are met. Ac
Post a Comment
Read more

The Friday of Anger...

Our thoughts are with our Egyptian brothers and sisters, on this, The Friday of Anger. ثورة على الفساد و الظلم والبطالة و التعذيب A revolution against oppression, corruption, unemployment and torture
Post a Comment
Read more

EGYPT: THE REVOLT THAT WILL SHAKE A TYRANT

Thanks to the complicity of private companies, including Vodafone, the Egyptian people are today unable to communicate online either internally to each other or to the outside world At least 15,000 protesters jammed Cairo's huge Tahrir Square January 25 in the biggest political demonstration seen in the Egyptian capital in more than 30 years. Tens of thousands more people turned out for demonstrations in provincial cities as well. At least two people were killed in clashes with the Egyptian state's security forces. But rather than be intimated by police repression, protesters were able to turn the tables on Egypt's notoriously violent cops, and beat up several. And as a follow-up to the demonstration, a range of secular, democratic organizations have called for a national strike on January 26. The movement has put a spotlight on the U.S.-backed police state ruled by Hosni Mubarak, the 83-year-old dictator despised for presiding over a society in which a
Post a Comment
Read more

Auckland Forum on the Revolution in Tunisia- Video

IST Statement on the Tunisian Revolution

The importance of the victory of the Tunisian masses is not limited to the successful overthrow of Ben-Ali, ending 23 years of dictatorship. The Tunisian Revolution refutes the arguments that had been disseminated by many right-wing intellectuals over the past few decades that the Arab masses are incapable of achieving revolutionary change, and that the times of revolution are over. The wide popular anger that took over the whole of Tunisia has reaffirmed that the masses make their own history and that class struggle is alive all over the Arab world. The Tunisian Revolution has also struck a hammer blow to the chain of alliances dominated by the United States, but also orchestrated by lesser powers such as France and Britain, that keeps the Middle East and North Africa subject to Western imperialism and allows Israel to oppress the Palestinians with impunity. The revolution has toppled a regime with close links to Israel that was hailed by Western governments and the Worl
Post a Comment
Read more

Empire: China, the U.S. and the shape of global capitalism to come 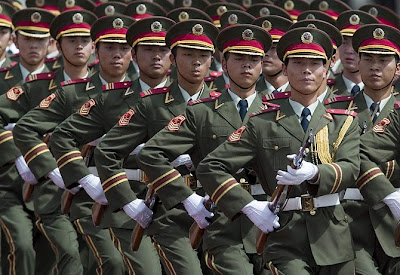 A brief look into the future: 23 January 2019: After seven years of solid economic growth in the Republic of New Zealand fuelled by rising demand amongst the Asian middle classes for organic south Pacific meat, dairy and wool products and the expansion of off shore oil drilling in the Great South Basin, the New Zealand economy appeared strong and vibrant. Yet in 2018 a virulent and previously unencountered form of mad cow disease spread through waterborne bacteria in polluted low land waterways had decimated the country’s cattle stocks and caused a complete collapse in demand for New Zealand agricultural products. The Government at the time, a minority coalition composed of the National Party, Green Party and New Citizen’s Party moved quickly to restore economic stability as the Kiwi dollar collapsed and the Government’s debts to Persian Gulf banks were called in. The New Zealand President announced a package of economic reforms including a proposal to levy a tax on the previously u
2 comments
Read more

The Cost of Capitalism

a poem by Jennifer Carmichael, SA It haunts me Where ever I go I see it In every coke can In every police car In every national flag The cost of living The expense of life Slaughtering of people Chains too tight to escape Hopes of a nation Coerced into consumption Whipped into submission Prohibition Forcing a nation Underground Into darkness Into poverty Into criminals The crown takes everything Leaves nothing For the poor For the sick For the hungry Yet they smile They hold their heads high In glory The crooks of capitalism Wave their flags in pride As their people fall Sick, poor, hungry Dead Consumerism The dark force of the government The evil of the world The drug of the people The death Of our brothers and sisters Our fathers and our mothers Our children Our children’s children Its there Through birth Adulthood To death Destruction With every coke can we drink In every police c
Post a Comment
Read more
More posts