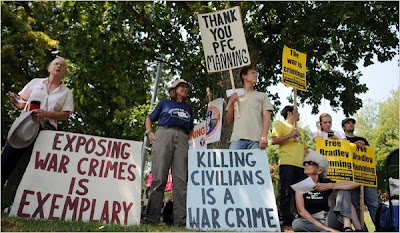 "God knows what happens now. Hopefully worldwide discussion, debates, and reforms. If not … than we're doomed as a species. I will officially give up on the society we have if nothing happens." - Bradley Manning

Behind the headlines of the Wikileaks leak of a quarter of a million cables is one of the most remarkable tales of our generation. It is fascinating to watch as the full extent of the cables leak becomes known and as the global public begins to realise the full extent of the atrocities and ironies of the United States imperial reach.

Noam Chomsky has rightly said that Wikileaks shows us, “That one of the major reasons for government secrecy is to protect the government from its own population”. As Chomsky has also said, “Perhaps the most dramatic revelation, or mention, is the bitter hatred of democracy that is revealed both by the U.S. Government – Hillary Clinton, others – and also by the diplomatic service.”

Bradley, a US intelligence analyst working in Baghdad and the alleged leaker of the diplomatic cables and thousands of other documents concerning the Iraq and Afghanistan war, was arrested in May 2010 by American authorities after being betrayed by a hacker. Facing up to 52 years in jail, Bradley, at just 22 years of age has undertaken one of the more courageous acts in order to ensure the people of the world can see and know the dark side of the US empire.

The transcripts of the instant messaging chats between Bradley and the hacker who betrayed him give an unusual glimpse into the soul of Bradley and can only inspire a sense of confidence in the humanity and courage of this man. Bradley best represents the motto of wikileaks that “Courage is contagious”. Quickly we have seen the editorials by corporate newspapers and the columns hastily written by US ambassadors arguing that this leak represents a massive threat to diplomacy, to human life and to history itself. Instead our editorials should ask why it took a 22 year old to expose the travesties of our time? Are those aged over 30 so timid and spineless that they dare not stand up for what they believe in?

Let it be said and said again that there would be no war, no human rights abuse, no autocracy and tyranny if Bradley’s courage swept across the globe faster than swine flu. The despotic Arab dictators, the repressive Asian juntas, the fanatical European financer capitalists wouldn’t last a second if every human was prepared to stand up and say enough. We can only hope that the global revolt that Bradley could inspire doesn't have as its soundtrack the song that he lipsynched as he copied the myriad of secret files from the military database he had access to.

“I think the thing that got me the most… that made me rethink the world more than anything was watching 15 detainees taken by the Iraqi Federal Police… for printing “anti-Iraqi literature”… the Iraqi Federal Police wouldn’t cooperate with US forces, so I was instructed to investigate the matter, find out who the “bad guys” were, and how significant this was for the FPs… It turned out, they had printed a scholarly critique against Iraqi Prime Minister Maliki… I had an interpreter read it for me and when I found out that it was a benign political critique titled “Where did the money go?” and following the corruption trail within the PM’s cabinet I immediately took that information and *ran* to the officer to explain what was going on. He didn’t want to hear any of it. He told me to shut up and explained how we could assist the FPs in finding *MORE* detainees. Everything started slipping after that, I saw things differently. I had always questioned the things worked, and investigated to find the truth, but that was a point where I was a *part* of something, I was actively involved in something that I was completely against.”

As Bradley says about his former colleagues, “Most didnt care… but i knew, i was playing a role in the lives of hundreds of people, without them knowing them… but i cared, and kept track of some of the details, make sure everybody was okay.” Bradley’s humanist leanings and anti-authoritarian nature meant he snapped far quicker than most in his environment. Releasing the documents he hoped to give the world a “public good” that could be used to make informed decisions. As Bradley goes on, “i dont believe in good guys versus bad guys anymore… only a plethora of states acting in self interest… with varying ethics and moral standards of course, but self-interest nonetheless.” 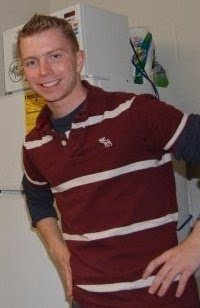 A queer army officer who had survived growing up in a town with more “pews than people” where he refused to recite the religious parts of the pledge of allegiance and then becoming a minimum wage retail worker living in his car after being kicked out of home for being gay, Bradley didn’t owe the world much. Yet with his courage he has shown that one person can change history and that we all have a role to play in defending democracy, freedom and peace from the tyrants and bureaucracies of the world.

Even now as some bay for Bradley’s blood, let us hope that in Bradley’s actions we find the courage to renew our own activism to end the carnage and the chaos that the governments of the world create and which we and our brothers and sisters from Baghdad to Boston and from Kabul to Kiribati must bear.

As so many sit idly by while so much devestation is done, let’s hope that Bradley gives more of us the courage to resist.