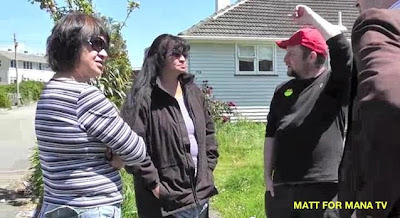 “It’s lovely up here eh. All these neat rows of homes under those rolling green hills,” I said to my arresting officer as we drove up Warspite Avenue, Cannons Creek.

“It’d be nice if they bulldozed all the houses. No one wants to live here,” replied the women police sergeant as she turned her head to check out a couple of hoodied young men next to a takeaways.

I was shocked by what she said and then the radio crackled to life and the sergeant rapidly relayed to another unit the basic information about the known troublemaker she had seen hanging out outside the shops. The kid she’d been discussing soon ended up in the cells with us.

This is war- Porirua style. Within minutes of 3News airing a piece on our state housing occupation, four cop cars were outside and a dog handler was first on scene asking me where the burglary was.

There was no burglary just four young men getting arrested for protesting for better housing in a city where a quarter of children grow up in overcrowded homes while dozens of state houses lie empty. Where rheumatic fever rates are the highest in the developed world while vacant Housing Corp blocks that were meant to be built on years ago are still pushing up daisies.

We’d just squatted a house to highlight the plight of Carolyn, who lives with her partner in her daughters garage. The garage is cold, leaks and is unventilated. Carolyn has asthma that the gas heater and damp conditions exacerbates. Carolyn works hard cleaning homes for ACC claimants. Her partner works for a local light manufacturing company. He has been hard done by in a couple of jobs, took one trucking company all the way to the Employment Court for paying him below minimum wage. Carolyn’s daughter has been sacked under the 90 day no rights law. They are a typical working class family living in Porirua. Poor in wealth but rich in spirit. They are involved in the community, volunteer their time, active in local unions and kura kaupapa.

But we shouldn’t have to be here doing this. Twenty something year olds having to squat an abandoned house to draw attention to families down the road living in garages. Everyone needs a home and property developers who can make mills out of making another McMansion will never provide humane, accommodation at affordable prices for the working poor. How long will the state let people sleep rough, in cars or in garages? Too long. We need a political alternative. We need direct action. We need to unite and fight against a system that lets people rot and then hires an army of blue uniformed mercenaries who think that the country they occupy needs to be bulldozed.

My arresting officer wants to tell me about how tough her job is, about attending suicides and the human misery she encounters. Yet she sees just one side of the creek. For two weeks we’ve been doorknocking through this area and we’ve met hundreds if not thousands of lovely people. Hardworking New Zealanders and loyal union militants raising their families as best they can but outraged at the hidden fees of sending children to public schools. Old Pacifica men reading newspapers in the early evening as their grandchildren are busy in the kitchen. Burmese refugees enrolling to vote on the doorstep of their modest homes, but determined to never again be denied their right to a political opinion. 18 year olds who work at the local mall and are doing their best to move ahead in life by studying part time. Proud families that decorate the entranceway to their house with their children’s school certificates. Local tradespeople who want to work but can’t find a job when the employers find out they are over 50. The bouncer who has just come off nightshift but has been thinking about the local by-election. The older Scottish couple from Mungavin who’ve made this beautiful suburb their home, so far from Glasgow.

In the late afternoons as we tread another mile under our shoes in this campaign, we see the younger kids running around the yard, the older kids wandering home after a hard days work at high school, the men and women who arrive home exhausted from a day delivering the post or fixing the roads. For all these people the Creek is home. To the cops these people and their homes are just trouble, a permanent crime scene that needs to be destroyed. As the cop said, “No one who lives here does so because they want to”. Safer communities together? Not a chance. The views of the cop are a window to the real lack of control the Cannons Creek community have over the police.

Six hours later we were released on some bogus charges that will get thrown out or dropped pretty quickly. Yet after tomorrow, when days become weeks and months become years, the war on the poor in Cannons Creek will continue. The houses will rot, the people will decompose and the cops will patrol the ruins of a country that people in the 19th century thought would become a socialist paradise. As we head deeper into the 21st century it is clear that for the majority of New Zealanders the future will be the nightmare capitalism of poverty wages, substandard accommodation and the grim barking of police dogs in the night.