Workers up the ante - another Aotearoa is possible 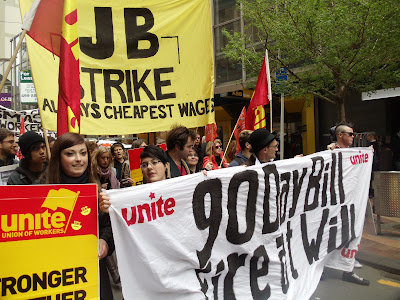 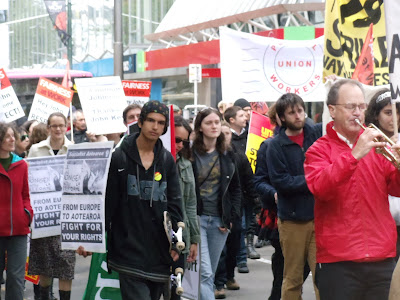 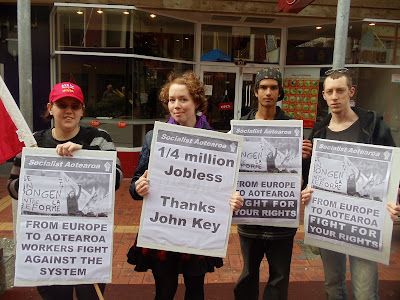 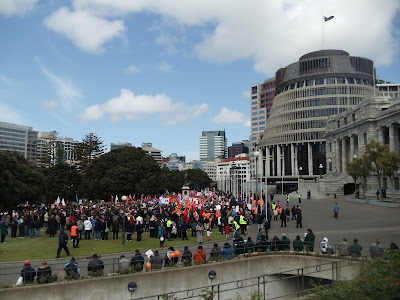 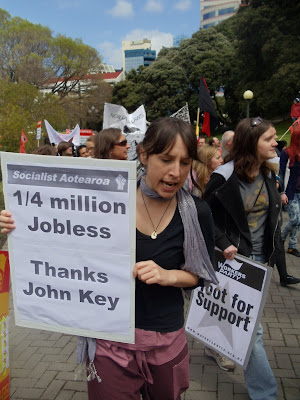 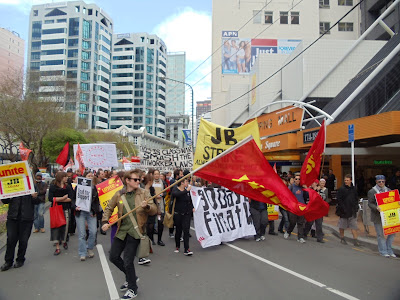 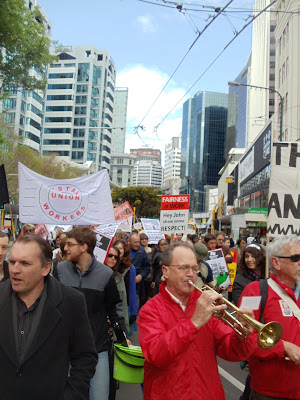 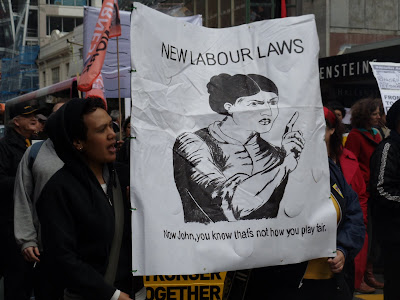 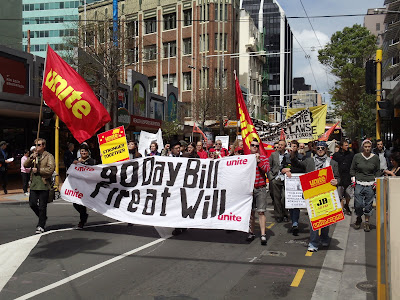 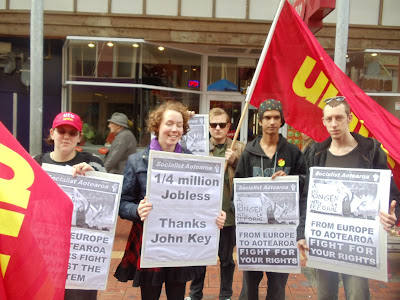 22,000 workers mobilised on October 20th to send a message to the Government - we are going to fight for our rights.

The biggest mobilisation of union members since 1991. The action marks a turning point for the union movement. At union offices in Wellington Trades Hall, banners from the 1990s were being taken out of the cupboard. The old banners, slogans and activists of a fighting movement will be be given new polish.

As nurse and socialist activist Grant Brookes said, "The NZ Nurses Organisation has called stop work meetings in District Health Boards nationwide, for the first time since 2004. You can't imagine how long some of us have been waiting - and pushing - for this."

Most importantly the union leaders are promising further action, a stark contrast to 1991. The CTU are talking about organising futher mass outreach work and rallies next year.

There are lessons to be learnt from the rallies. The events centre was too small for the Auckland rally - thousands of workers left outside in the car park in the wind. Meeting finished and leaders left as busload after busload of workers continued to arrive, the motorway was jammed with union members trying to get there on time. Next time we need a massive rally on Queen Street, make sure no one is locked out or that the action finishes just as people arrive.

In Wellington some workers thought the Mayor's speech was bizarre and some people felt partronised by the tone of the speeches. The voices from the rank and file need to be on the platform.

However the union movement is under a concentrated and sustained attack from the right led by Peter Jackson and bolstered by The Dom Post. The actors dispute, education and health union fights over pay and quality are putting employers and the state under serious pressure.

Forced against the wall they've come out swinging. Unable to explain 1/4 million unemployed workers, wage stagnation and cuts to public services Key and co will be forced to turn the menace of union power into an election issue. For right wing voters at Australia's 2007 election, union militancy was their number one political concern.

As the recession continues to bite, as wages deteriotate and working conditions are attacked unions must continue to be staunch and intensify outreach to working people explaining the need for working people to make a stand whether they be doctors, teachers or actors. We can't backdown now.

With next year shaping up to be a showdown over wages for Rugby World Cup workers in hotels and hospitality it's vital that the demand for a living wage is heard as we head into the minimum wage review period and the Government makes its decision in December.

Mass strikes, direct action and public outreach should continue as we head into Summer. "Fair pay for Xmas" is a catchy slogan.

As Mike Tait of the ISO and an EPMU member has said, "The strike is our only real strength and organisation is the only way to build that strength. In the 70s and 80s when strikes were high, we had a much more equal society and the NZ economy was much more highly ranked than now."

In coming months socialists will have to focus on supporting and organising more and better industrial action. During this struggle the serious, committed working class fighters will prove themselves on their worksites, in their communities and on the streets. From these networks of struggle a new left movement will be forged. Let's keep upping the ante. No Christmas truce. Keep up the momentum and the resistance. Socialist Aotearoa will be at the heart of that resistance.

Keep the Government under pressure. Build unity around opposition to neo-liberalism and continue the struggle- stop the attacks on public services, no to mass unemployment, defend workers' rights, fight for a living wage and livable benefits. We also have to have a long term vision for a socialist society and explain that vision to people.

Another Aotearoa is possible. On October 20 you could see the hope for the future in the faces of the working men and women who make this country run. Let's keep fighting to make that future a reality. As someone shouted on one of the marches yesterday, "All power to the workers!"

Unions' fight for workplace access takes to the streets http://www.nzherald.co.nz/nz/news/article.cfm?c_id=1&objectid=10681837