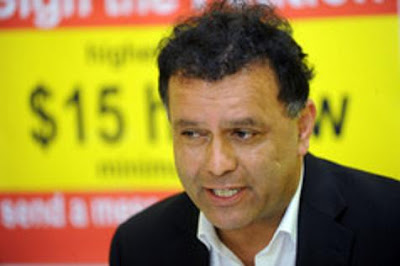 As you may be aware the Labour Party MP for the Mana electorate in Wellington, Winnie Laban, has resigned from Parliament, and on Wednesday 27 October nominations closed for the byelection.

The byelection is due to be held on November 20 just before our first Unite conference. The electorate of Mana has been a traditionally safe Labour seat. It’s an extremely unequal area incorporating some of New Zealand’s most deprived areas like Cannons Creek and Porirua East and also some of New Zealand’s most affluent like Whitby and Plimmerton.

Labour is expected to win comfortably with party worker Kris Faafoi ghosting to victory. National’s Hekia Parata will also put in a show shoring up support for the Tories in the wealthy coastal suburbs.

Yet for many residents of Mana the core issues will be ignored. Wages and taxes. Poverty. Employment. Public transport.

A living wage and fair taxation.

Unite has fought tirelessly for the minimum wage to be set at a liveable level and we’ve opposed changes to make the tax system more unfair. Yet Labour and National will not lift real incomes to what they were before 1984 and before the destruction of working class incomes to bolster corporate profits.

Many Mana residents will only see a better tomorrow or higher wages if the minimum wage is moved to $15hr now and then set at two-thirds of the average wage. Raising wages also boosts benefit and family assistance levels to working folk who don't have a job. We need to ensure that raising the minimum wage remains one of the central political issues for the country.

Removing GST from fresh fruit and veges is a gimmick and the only way to improve New Zealand’s tax system is by overhauling the system and removing unfair, anti-productive taxes like GST and replacing them with new taxes on unproductive wealth- capital gains tax, death duties, luxury goods tax, a financial speculation tax and returning the company and upper income tax rates to their pre-crash levels.

Porirua is one of the poorest neighbourhoods in the country. This is shown by child poverty statistics. The spread of third world diseases in Porirua is a black spot on our community. Porirua East and Cannon’s Creek areas have the highest rates of rheumatic fever. Rheumatic fever, "It is a third-world disease, a disease of overcrowding, inadequate housing and poor healthcare access." Hastings GP Liffey Rimmer has said.

Rheumatic fever starts as a sore throat and streptococcus A infection and can be quickly treated by anti-biotics. Untreated it can develop into a serious illness that lasts for life eventually destroying a victims joints and parts of their heart.

Nationally, rates of rheumatic fever are six in 100,000, but rocket to 106 in 100,000 in Porirua East. [1] Rheumatic fever hospitalisation costs are approximately $10 million per annum.

The Government could lift many in Porirua out of poverty and end the spread of third world diseases by,

In 2006 there were 2,130 on the unemployment benefit in Mana in 2006. Porirua city has the highest unemployment levels in Wellington region.

Nationwide unemployment is 6.8% and rising. 68,200 youth aged 15-24 that were unemployed as of June 2010. That means there are 159,000 New Zealanders unemployed. Including those looking for work or available for work, jobless figures had risen to 255,700 in June. 102,400 part-timers want more hours. Long term unemployment is up 70.4 percent in the last year. These unemployment levels are a scandalous waste of human energy and talent. The cost of providing jobs to the unemployed is comparatively small. The difference between the $180 per week the state provides in unemployment assistance to a single 20-24 youth and the $600 per week it could pay in return for community service, construction or any other form of employing an unemployed worker is just $21,840 per year.

To put that in perspective the $1.7 billion taxpayer bailout for South Canterbury Finance could pay the wages of 77,838 unemployed workers. Look at it another way and instead of providing tax cuts to the rich that will cost the Government $4 billion next year it could have created full employment.

Neither Labour or National have a serious short term plan to create jobs although they are happy give cash to failing financiers. Nor do they have a long term plan to rebuild and protect a productive economic base in New Zealand in the long term.

New Zealand needs to ensure that every person who wants a job can get one and that we need a long term plan to regrow our productive economy.

For 25 years until 1998 a Todd Motors employed up to 2000 workers making cars and trucks in Porirua in the “university on the hill”. Now because of the deregulation of our economy and the retreat of the state from economic development we have lost the ability to create good jobs. We need to have a long term plan to make the technology of the future in New Zealand- trains, low carbon energy alternatives and sustainable, good quality consumer goods.

Public transport is another major issue for Mana that has national implications. Labour’s failure to adequately fund and develop new public transport options under public ownership and control is compounded by National’s move to shift the cost of public transport onto users and the ongoing threat of privatisation.

This move towards increased user pays will hurt students, low income workers and the elderly. Nineteen percent of Porirua residents use public transport every day or nearly every day

Already a trip using public transport from Porirua to Wellington CBD costs $4.40 (based on a ten trip fare) while the cost of the same trip by private car is only $4.05 (operating costs only). The Government want to increase fare price at 3% per year for 10 years. At 3% increases each year till 2020 it will cost $60.48 for a ten trip from Porirua to Wellington in 2020.

Public transport is better for the environment, reduces congestion and decreases reliance of unsecure global oil supplies. Fares should be frozen and eventually reduced for those who can’t afford them. Free public transport is affordable and is a common sense long term solution to carbon emissions and city congestion. We need to oppose any form of privatisation and move to create a publicly owned bus company to provide public transport services in our largest cities.

The left can deliver a strong intervention in the Mana by-election.

The neo-liberal right wing economic theory that has prevailed for the last twenty-five years is in crisis and falling apart. We have a chance in Mana to give our alternatives a national stage. Unite has always been a movement of the working poor, now we have a chance to politically articulate four key alternatives to neo-liberalism- living wage and fair taxes, healthy communities and eliminating child poverty, employment for everyone and rebuilding the economy and good, affordable public transport.

Mana matters and all lefties should be supporting it by whatever means necessary. National, Labour and politics as usual have failed Mana, only a serious left alternative to neo-liberalism can begin to repair the damage done to the people of this electorate.

Tax the idle rich, not the working poor