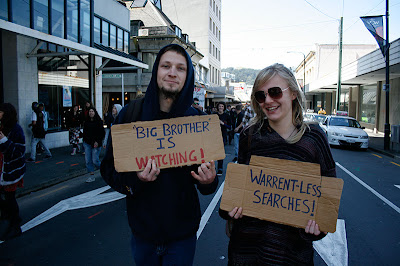 Around 300, mostly young, people took to the streets around Wellington on October 8 to protest against the Search and Surveillance Bill. Fast food workers from Porirua rubbed
shoulders with hippies from Karori and Victoria University lecturers stood side by side with unemployed youth from Newtown in an impressive display of unity against the construction
of a surveillance society. [ More photos ]

The law provides for new and chilling powers of search extended for a range of government bodies, from the police to WINZ. It takes away people’s rights to silence. It extends police powers around ‘organised crime’ (which can mean an “association of three or more persons”) to force us to cough up documents and computer files we have or may have in the future. It will no doubt be used against activists and socialists. [ Read more about the Bill ]

During the march from Cuba Mall to the police station and National Party HQ, a union organiser called for a end to intrusive workplace surveillance, radicals demanded the right to protest in a free society and an academic worried that the state was creating a Panopticon that will stifle dissident thought.