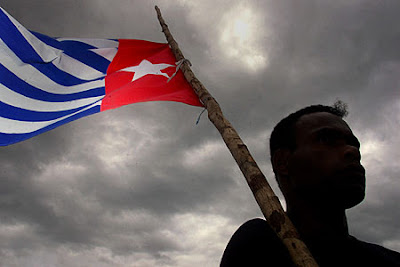 A spokesperson for New Zealand's foreign minister Murray McCully says the brigade is a separate entity from the Indonesian officers New Zealand police have been training in Papua.

The Indonesia Human Rights Committee spokesperson Maire Leadbeater says she accepts New Zealand is not training paramilitary officers, but she says the latest incident raises greater concern about its role in Papua

"Is this is a police force with structural problems where brutality and violence against indigenous people is endemic and is this really the right way our aid should be directed. Would we not be better spending our aid dollar on something clearly useful like offering scholarships for English language training to indigenous people."

This comes in the wake of the release of video showing Indonesian forces torturing West Papuans.

West Papuan human rights workers have obtained a series of mobile phone videos of brutal acts of torture on two West Papuan priests. Indonesian security forces, most likely troops from the Kostrad battalion 754 based at Nabire, filmed the torture March 17 2010 at a road bridge near Tingginambut, Puncak Jaya, in the midst of a still ongoing military operation. More at Pacific Scoop

The absolute silence in the media and from the Government is distrubing. The wikileaks release of Iraq war documents should be alerting all of us to to the danger of turning a blind eye to brutality. However the more things change, the more they stay the same.

The extent of our co-operation with Indonesian police forces is distrubing,

Just as the New Zealand Government let genocide occur in our Pacific neighbour East Timor for 24 years, today our Government cosys up to Indonesia as the brutal occupation of West Papua continues.

As Rory MacKinnon of Scoop has written,

Yet there is hope: McCully and his prime minister can publicly insist on a genuinely independent investigation. They can join calls in the Pacific Islands Forum for a fact-finding mission into human rights violations in West Papua. They can withdraw their joint training exercises with Indonesian law enforcement until the law is actually enforced in the region. There are all sorts of things they can do to give Monday’s victims and the people of West Papua hope. But trusting the butchers in Indonesia’s military to sort it out amongst themselves is not one of them.

Never again can we be silent and indifferent to the plight of Pacific peoples struggling for self-determination.

Never again can we cosy up to Indonesia as it tortures and kills those who oppose its bloody occupation.