Labour Day 2010: In the midst of a working class upsurge 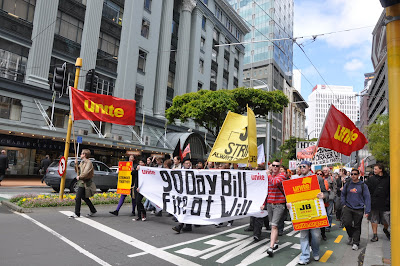 The Hobbit dispute has turned from a massive global boycott by actors seeking a collective agreement into a capital strike against NZ by Warner Brothers. On the horizon is the RWC and the potential for significant unrest.

It's never an easy road and employers and John Key have been quick to villify Helen Kelly and Robyn Malcolm for their role in defending unionism. The principle underpinning the resolve shown by unionists from Parnell to Malcolm is summed up in typical Kiwi sentiment, "I really believe in this stuff. I believe in workers' rights."

Winning the 8 hour day
All this direct action would please the old man of the local labour movement, Samuel Parnell, if he was around to see it.

New Zealand is recognised as the one of the first places in the world where the eight hour working day was generally established. The struggle for the eight hour day began in early 1840 with the carpenter Samuel Parnell, recently arrived to Petone, declaring to a prospective employer that he would not be employed to work more than eight hours a day, “There are eight hours for sleep, eight hours for labour and men do require some little time for themselves”.

This stand gave some heart to the colony’s carpenters and at Petone a Carpenter’s Association was formed and at its formative meeting in October 1840, it declared eight hours to be the working day and that “anyone offending should be ducked in the harbour”. With this the eight hour day movement in New Zealand began and through its early days direct action has played a critical role in ensuring that employers engage men only at eight hours.

Where workers have had the industrial power, organisation and confidence, they were mostly able to win the eight hour day in the early years of this colony. New Zealand’s first strike was in 1841 when labourer’s constructing the road from Wellington to the Hutt Valley, successfully struck for an 8 hour day. In the province of Otago, the Otago Association had guaranteed the settlers an eight hour day. But on January 24 1849, Captain Cargill, the leader of the settlement issued a notice that ten hours would be a days work. This caused the settlers, led by Samuel Shaw, to hold a mass meeting where they pledged to uphold the eight hour day. 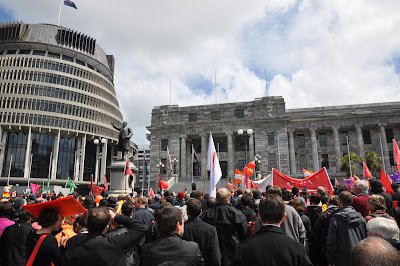 Still fighting
170 years later however the 8 hour day is under attack.

CTU secretary Peter Conway says there are nearly 260,000 people without jobs, while more than 100,000 others want more work so they can pay the bills.

He says the 2006 Census showed 416,641 people work more than 50 hours per week and the struggle to make ends meet is reflected in the current industrial unrest.

And as Matt McCarten of Unite has pointed out,

Global upsurge
Some activists like to contend that we are in the midst of a global downturn in struggle. However this is far from the case. We are actually in the midst of a vast upsurge in working class activity and new forms of global labour solidarity are being built. As RadioNZ's recent programme on global unions showed, from the London Dockers Strike of 1889 to the current UnionAid project, NZ unionists have been at the forefront of global labour solidarity.

Last month 100 million workers struck in India against privatisation and rising prices. This is the largest strike ever in the history of the world.

In fact 7 out of 30 of the largest strikes in history have happened this year. India, South Africa, Turkey, Spain, France, Italy and Greece.

So as we remember our martyrs (Fred Evans, Ernie Abbott and Christine Clarke) let's keep an eye on the future and keep the strikes, picket lines and occupations steady as we fight to stop the Nats and the employing class attacking our wages and conditions. Not to mention the necessity of standing up to another round of neo-liberal restructuring that will destroy our public housing, social welfare and education.