The well attended union meetings and rallies around the country yesterday were the most hopeful sign for New Zealand I've seen for a long time.

I went to the rally at TelstraClear stadium in Manukau but never got in. First we were stuck for half an hour in a traffic jam as we neared the venue (bigger than a normal Auckland jam) and when we got there the stadium was overflowing with as many people outside as inside.

Attending the meeting were mums and dads, grandmothers and grandfathers who represent all that is decent about New Zealand. Too often it is the big private capitalists who get feted by politicians but the real work is done by these wage and salary earners whose energy has built the country. 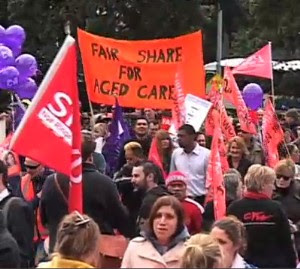 These workers are in a campaign to fight back against Act/National/employer policies to make our low-wage economy even more difficult for working New Zealanders.

The last big attack on workers and their right to organise together in unions was from the 1991 Employment Contracts Act, which made the labour market more "flexible". For employers "flexible" means reducing workers' bargaining power, keeping pay low, removing penal rates, turning fulltime jobs into casualised employment and maintaining a sizable pool of unemployed to increase the vulnerability of workers.

As I've said before, this is the defining reason New Zealand wages and salaries stagnated while Australia surged ahead. Their union movement was not crippled and their business owners were forced to invest in improving technology and productivity while New Zealand business owners grew fat, not by increasing productivity but by creaming profits from stagnating wages and salaries.

Labour did little to stem the slide during its nine years in government and now National is back for another round of worker-bashing on behalf of too many lazy, incompetent capitalists.

This time, as CTU president Helen Kelly says, workers are assumed to be liars and skivers with employers to be given the power to demand a medical certificate after a single day's sickness. But at the heart of the attack is the "fire at will" provision whereby a worker may be fired without reason or appeal in the first 90 days of employment.

But workers are fighting back this time. They didn't in 1991 because they were sold out by a leadership which was gutless and politically corrupt.

(Ken Douglas, failed union leader in 1991, has spent his time since then as a bedfellow of those who gained the most from trashing workers' rights.)

Union membership in New Zealand remains low and Key is working with employers to keep it that way. He is worried there will be a backlash (as there is in other countries) from workers objecting to paying the price for the greed and stupidity of bankers who caused the financial crisis. Best to get in early and put in as many obstacles as possible to workers organising together.

But the spirit of yesterday's rallies means the fightback is alive and well.

John Key is bringing the class struggle to centre stage.

Photos in this post copyright to their respective owners and not to be reproduced.