Disabled people and beneficaries under attack 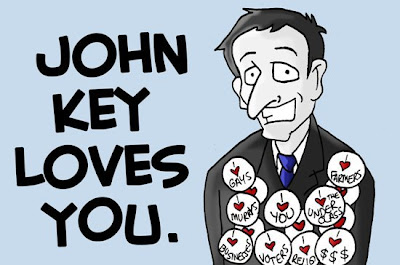 "They want to make poverty and unemployment an individual problem, blaming beneficiaries for not having jobs."

Disabled people and beneficiary groups were outraged last week at proposals by Treasury to kick tens of thousands of disabled people off sickness and invalids benefits.

The National Government has already begun to undermine New Zealand’s welfare system by pushing through legislation to force people on DPB and sickness benefit into compulsory work testing. Thinly disguised as a way of helping people out of poverty, it’s clear that these measures are all about making a life on benefit even more uncomfortable.

The latest proposals come as part of the consultation by the Welfare Working Group into the long term future of benefits. In the same way as other countries, like the UK, a right wing government is using the economic recession to argue that we can no longer afford to allow even a basic standard of living to people who are unable to work. The Welfare Working Group, formed by Paula Bennett to destroy our welfare system, is made up of people with no idea about life on benefits, and led by Paula Rebstock, the former Chair of the New Zealand Commerce Commission.

The focus of the Welfare Working Group is how to force people off benefits. They don’t seem to care whether there are jobs available, or the support or training for people to take those jobs. It is clear that they want to make poverty and unemployment an individual problem, blaming beneficiaries for not having jobs. This is at a time when the government has cut the training incentive allowance, adult community education, and access to early childhood education, making it even harder for people to get training or be able to take jobs.

On top of this, the Welfare Working Group is considering insurance-based benefits systems, where you only get out what you were able to pay into the system, assuming you ever had the opportunity to be able to pay anything in. Treasury’s attacks on disabled people are another indication that the aim of the changes has nothing to do with helping people out of poverty. It is all about saving money and forcing people to take whatever job they can get, no matter how insecure or poorly paid.

We should be clear that this won’t just affect people on benefits now. It has an impact on the workers across New Zealand. Forcing more people into the reserve army of labour helps bosses to drive down wages and conditions, making things worse for all of us. Taking away basic entitlement to benefits can affect each one of us, if we are unlucky enough to lose our jobs. That’s why this isn’t only an issue for beneficiaries - the whole union movement needs to back the campaign to fight for benefits. We call on the CTU and all of the trades unions to join the fight to save our benefit system and demand a decent standard of living for all.
Mary Hill
Commentary Crisis Economics Unemployed Unions welfare