Defend our work rights - We are winning 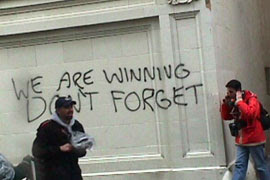 On October 20th many thousands of unionists will take to the streets to defend employment laws from attack.

The Nat's plan to allow unfair dismissals during a 90 day "fire at will" no rights period, cut sick leave, remove the right to union access and chop up other work rights has been met by a furious response from the unions and the left.

As we hit the streets let's remember,

What does this all point to? These are the dying days of John Key's "brighter future". Unions are winning. The left is winning. We are winning.

The need now is to keep the pressure on. After October 20 we need to maintain the rage. We'll have to stay in the streets, stay in the headlines and stay in the workplaces.

As Alex Callinicos of King's College, London, has written, "Not paying the debt, nationalising the banks, introducing capital controls, programmes of public investment—all these are necessary in order to address the needs of the vast majority in economies wrecked by speculation and slump. But implementing them would involve a massive confrontation with the existing structures of economic and political power. It therefore points towards, not a reconstruction of capitalism, but a move beyond it."

In Aotearoa we now have 255,000 jobless and 37,600 long term unemployed. The Government will borrow a billion a year to provide tax cuts that will mostly go to the rich. 42% of the value of the tax cuts will go to the richest 10% of New Zealanders.

At the same time the Nats make cuts to home help for the elderly, support for the intellectually disabled, funding for early childhood and introduce worktesting for people with serious disabilities.

If you're not outraged you're not paying attention.Together we are strong and together we can defeat these attacks. Get organised now and maintain the resistance.

Enjoy October 20 and remember - We are winning!