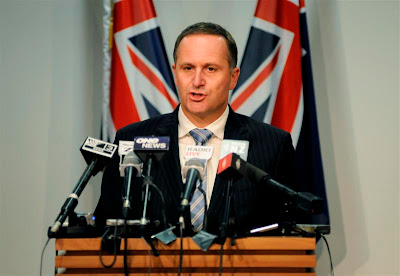 10.40pm UPDATE: Reports have just come through that Robyn Malcom has just been deported to Australia and stripped of her New Zealand citizenship. Journalists reported seeing her being dragged, chained by blue trolls through Auckland airport.

After secret closed door meetings between John Key, Gerry Brownlee and a delegation of Warner Brothers executives the Government have announced sweeping new law changes in exchange for the company keeping The Hobbit in New Zealand.

Speaking at a press conference late on Tuesday night the Prime Minister and Sir Peter Jackson outlined a new law that will be introduced under urgency in Parliament on Wednesday morning and is expected to pass into law by the end of the week.

In comments to media John Key said that the Hobbit Enabling Bill had been drafted to ensure industrial certainty and a profitable economic environment for Warner Brothers.

"The Hobbit Enabling Bill when passed into law will designate all workers' unions as terrorist organisations under the Terrorism Suppression Act and participation in collective bargaining a criminal offence punishable by hanging.

"The Hobbit Enabling Bill will also remove all workers' rights completely from the statute book. From now on no worker has a right to annual leave, sick leave, the right not to be unfairly dismissed or to a minimum wage.

"For some occupations we will require more certainty than ever before. To ensure the producers economic certainty all actors shall be required to work for a set naximum wage of $2 per hour with no additional benefits.

"We've also looked carefully at the tax system and will reduce the corporate tax rate to 0% for any international corporation. Of course this may impact our social services such as healthcare but we will make this shortfall up by slave labour provided by unemployed actors."

"All old episodes of Cambell Live will be destroyed, especially those episodes where I gave any assurances that Warner Brothers are not just playing for tax breaks (We have never asked the Government for increased tax breaks and I don't believe that Warners will 7min50s)."

"New statues will be created around the country to honour the humble Weta technician who has proudly stood for the rights of multinational corporations to exploit New Zealand workers."