Stop the war, end the occupation, troops out now! 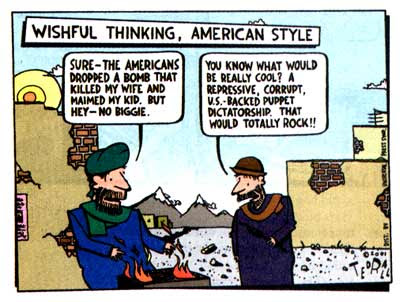 New Zealand has sustained its first casualty in the occupation of Aghanistan. Lest we forget that this soldier's death is nothing compared with the deaths of 8,768 - 28,360 Afghan civilians who have been killed as a resuly of the war and occupation since 2001.

Global Peace and Justice Auckland has released a statement,

The death of a New Zealand soldier killed in Afghanistan today should be the catalyst for a withdrawal of all our troops from the country where they are part of a hated foreign occupation.

The government must bear responsibility for this death because our soldiers should not be there and never should have joined the invasion in the first place.

Gordon Cambell's analysis of the news looks at the role of the PRT and concludes,

For some time, our presence there has been wasted effort, and an unnecessary risk that has now been manifested in the death of the New Zealand soldier. Even the citizens of Bamiyan that we have been assisting have serious misgivings about our presence there, as this NGO report makes clear. The complaints in the report from Bamiyan residents have been summarized here.

‘When the PRTs were first deployed, their stated mission was to extend the rule of the central government in Kabul – run by the corrupt US puppet Hamid Karzai. The NZDF is not conducting a mission of mercy for the people of Afghanistan but simply lending legitimacy and material support to an occupying army. It is the US government and its co-conspirators who are the real terrorists there.’

The death comes as support for the US occupation plummets to record lows as the Wikileaks release of thousands of classified documents reveals the gritty details of a brutal conflict. Afghan anti-war, feminist MP Malalai Joya sums up the situation very clearly,

"What we have experienced in Afghanistan, Pakistan and Iraq is that you cannot bring peace with war. The US is responsible for the Taliban, and created them before they became enemies after 9/11.

My people do not support Karzai’s government, and there is no reason for these troops in Afghanistan.

If all the aid had gone to the people we could have rebuilt the country twice. It will be the people who will defeat the warlords and terrorists.

This is the only alternative for the bright future of Afghanistan."

Even the notriously pro-war newspaper The Dominion Post, was forced to concede that the war is "dispiriting, dirty and increasingly futile". New Zealand's media has been very supportive of the war in Afghanistan and its pro-war bias well documented. Noam Chomsky has written recently of the descent of the conflict into a Vietnam-like quagmire and the CIA's secret memos urging sophisticated propaganda to prevent & contain public opposition to the war in Western Europe. That's why it's up to all of us to keep up alternative channels of information to get the message out and build resistance against the war.

As US Veterans for Peace President Mike Ferner wrote,

Now that the rotten truth of the war has been dug out of government vaults and brought to light - the murder of civilians, the inexcusable deaths and injuries of our troops, the knife to the heart of every soldier's family member, the fact that "winning" in Afghanistan is meaningless, the outrage of our jobless and homeless as trillions are spent on war and bank bailouts - the most important question is, "what will we do about it?"

The answer is clear. Mobilise to stop the war, end the occupation and get the troops out now.