Showing posts from August, 2009
Show all

The Hell's Pizza outlet on Auckland's Quay Street faces a furious blockade and picket this Friday evening , as the anti racist group Socialist Aotearoa launches a boycott campaign in response to the chain's racist advertising, when they claimed that "at least our brownie won't eat your pet dog". Socialist Aotearoa protest organiser Tania Lim says- Speaking as a person of colour, I believe that such advertisements legitimises the negative stereotypes of people of colour, be we brown, yellow, or black. I'm protesting because I am opposed to companies like Hell's Pizza exploiting racism for the purposes of profit. Our message to Hell Pizza management and their smart arsed middle class "ironically racist" advertising idiots is this- Insult Pacific peoples of Aotearoa at your peril. Expect flashmob protests at your outlets. Prepare to lose a lot of customers who don't agree with your racist insults, "ironic" or otherwise. And do
1 comment
Read more

Socialist Aotearoa – A new force on the left 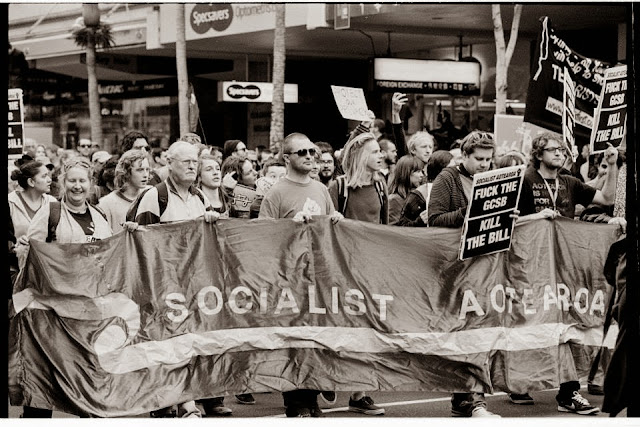 Socialist Aotearoa – A new force on the left Pre Conference Discussion Document no 3 by Socialist Aotearoa member Omar Hamed Any new organisation of mostly Auckland anti-capitalists facing a catastrophic economic crisis and a Tory government exploiting it to attack working people, the ongoing collapse of the biosphere and the ongoing centralisation of ruling class power and wealth locally and internationally is in a good position to lead a fight back of New Zealanders against the ruling class. However small radical groups of activists like Socialist Aotearoa remain fairly modest sized organisations and its ability to punch above its weight and spark a generalised offensive to meet the capitalists blow for blow on issues like greenhouse gas emissions targets, neo-liberalism in education, downsizing public services, corporatizing Auckland democracy, poverty wages & unemployment, rests on its ability to leverage the main organisations of the New Zealand left- the unions, the
1 comment
Read more

EPMU TELECOM/VISIONSTREAM DISPUTE - NATIONAL DAY OF ACTION – MONDAY 24 AUGUST Yesterday EPMU members involved in the ongoing Telecom/Visionstream dispute unanimously endorsed a National Day of Action this MONDAY, 24 AUGUST. The EPMU will send out more information shortly about events throughout the country, but this is an urgent request to all Auckland unions to support the following Auckland events: •When: Picket commences at 7.30am (arrive earlier if you need to park in nearby side-streets); •Where: Meet at Western Park, corner of Ponsonby Road and Hopetoun Street (now known as BBQ Corner); (click here for map: http://www.wises.co.nz/l/Auckland/Ponsonby/Hopetoun+Street/#c/2rfr1/70h4s/0/ ) •What: The picket will commence at 7.30am at the Park. Groups will move off to picket the nearby Telecom offices and K-Road intersections. The pickets will be maintained throughout the day. Teams of picketers will also be dispatched to various CBD locations at lunchtime (approx 12.30pm) to leaflet
Post a Comment
Read more

David Rovics Gig - 8pm, Thurs 20 August, Wine Cellar, K'Road, Auckland David Rovics w. Roger Fowler - 8pm Thursday 20 August at the Wine Cellar, St.Kevins Arcade, K'rd, Auckland. Last night of an Australasian tour by rebel folk musician from Portland, Oregon. $20 on the door. David Rovics has been called the musical voice of the progressive movement in the US. Amy Goodman has called him "the musical version of Democracy Now!" Since the mid-90's Rovics has spent most of his time on the road, playing hundreds of shows every year throughout North America, Europe, Latin America, the Middle East and Japan. He and his songs have been featured on national radio programs in the US, Canada, Britain, Ireland, Italy, Sweden, Denmark and elsewhere. He has shared the stage regularly with leading intellectuals (Noam Chomsky, Howard Zinn), activists (Medea Benjamin, Ralph Nader), politicians (Dennis Kucinich, George Galloway), musicians (Billy Bragg, the Indigo Girls), and
1 comment
Read more

PROTEST: No SAS Troops to Afghanistan - 12 noon Saturday 22nd August outside Papakura Military Camp, Grove Road, Papakura. A car convoy will leave from Unite Union office, 6A Western Springs Road, Morningside. Gather at 11am. Papakura Military Camp is the training base for the Special Air Services (SAS) troops who will be deployed to fight in Afghanistan in three rotations over the next 18 months. John Key announced this week that New Zealand will be sending SAS soldiers into Afghanistan to join US and British troops in the devastating quagmire that continues to lay waste to one of the world's poorest countries. On a day when British troops faced their highest casualties ever in a 24 hour period, even the most foolhardy warmongers must question this decision. Key admits in absurdly understated fashion that “there's no getting away from the fact that Afghanistan is a dangerous place”. It is certainly dangerous for foreign troops, but far more so for innocent Afghan
1 comment
Read more

Telethon- It’s safe to turn your TV back on!

Telethon is over! Anyone who had the misfortune to watch this dismal attempt by minor celebrities to keep sparse audiences entertained over 23 hours will surely hope that it won’t be back for at least another 15 years. But the really dreadful thing about Telethon is that it needs to happen at all. What kind of society do we live in where tens of thousands of children have to go to school without shoes, coats or food? And what kind of society is it where the only way they can get those basic necessities is by people dressing up in chicken costumes to raise money? Charity events like this show that ordinary people do care about each other, and are not fundamentally selfish or greedy. But they also expose the hypocrisy of the capitalist system. Without a hint of irony, the telethon that was supposed to address child poverty shamelessly plugged consumer goods and cut to endless adverts for the show’s sponsors. Equally shameful is the government’s response to the disgrace of child
Post a Comment
Read more

Around 25 people marched through the streets of Henderson on Saturday 8 August to convene a session of the People's court outside Paula Bennett's electorate office. Ms Bennett had been summonsed the week before to defend her decisions to cut the Training Incentive Allowance for single parents and disabled people, and to explain why she thought she had the right to make public the personal details of beneficiaries. This week's protests was joined by community groups, trades unions, local activists, single parents, disabled people and socialists from across Auckland. The Minister failed to attend her own hearing, offering no excuse. With Dr Hu presiding, the court agreed to invite members of the crowd to offer a defense, in the interests of justice. However, the jury was unconvinced by their arguments, and found Ms Bennett guilty of the charges laid against her, in a unanimous verdict. Ms Bennett was sentenced to a painful punishment, and a warrant has been issued
Post a Comment
Read more

From Korea to Ireland- Workers Occupations Under Attack

THE CLASS STRUGGLE IN SOUTH KOREA Socialist Aotearoa public meeting with Jacob Lee, Korean Socialist with All Together Wednesday 19th August. 7pm. Clubspace at Auckland Uni Day of fierce fighting at occupied South Korean car factory by Owen Miller in Seoul The attack began at dawn today and lasted until late afternoon. Under a hail of metal bolts and stones from Ssangyong company thugs, liquid tear gas dropped from police helicopters, incessant loud music and an all-out assault by police commandos armed with steel pipes and taser guns, the occupying workers at the Ssangyong auto factory in Pyongtaek, South Korea, have held out for one more day. They forced back a number of attempts by police to retake the car plant’s paintshop, using every means at their disposal including flaming barricades, petrol bombs, slingshots and anti-helicopter spikes. This sort of fierce resistance reflects the real desperation of workers faced with the loss of their jobs and unlikely to find ano
Post a Comment
Read more
More posts