Showing posts from June, 2009
Show all

Honduras- Resist the Coup, Solidarity with the People

The coup in Honduras 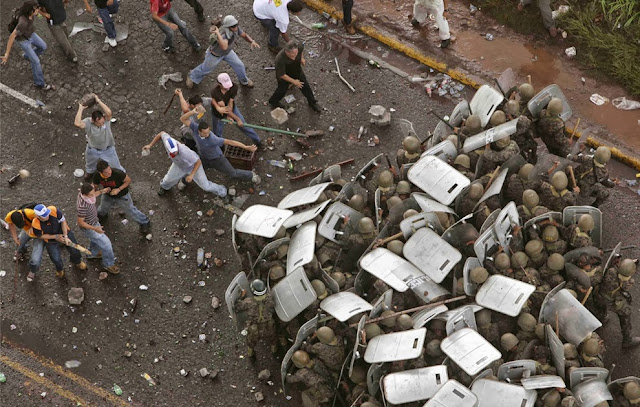 Honduras' elected president, Manuel Zelaya, was taken prisoner by soldiers and forced out of the country on the day Hondurans were supposed to vote in a nonbinding referendum on changing the country's constitution. Early in the morning, Zelaya was captured, beaten and forced onto a plane that took him to Costa Rica. Other members of his government were also detained--the whereabouts of several were unknown late Sunday night. The events in Honduras were similar to a coup attempt against left-wing Venezuelan President Hugo Chávez in 2002. But that U.S.-backed effort failed when masses of poor Venezuelans mobilized to demand Chávez's return. Whether the coup in Honduras will succeed remains in doubt. International condemnation has been strong. The U.S. government at first appeared ready to acknowledge the coup-makers as a "force for democracy." But Secretary of State Hillary Clinton later condemned the coup and called for respect for "constitution
Post a Comment
Read more

Kia Ora, With renewed strength, the Peace in Pieces Committee is determined to present the long awaited lecture series highlighting the plight of Tamils in Sri Lanka. It will be an opportunity to hear New Zealand academics and other subject matter experts speak about various topics including media freedom and human rights violations in Sri Lanka to provide a better understanding of the crisis that has unfolded. Due to unforeseen and at the same time despicable reasons, the lecture series did not commence last month as initially planned, presumably due to its controversial nature. We sincerely hope that this is by no means going to discourage you from attending but in fact has given rise to your curiosity. This time you will have the opportunity to hear two academics speak at the Auckland University of Technology (AUT): ‘Journalism, Human Rights and Terrorism in Sri Lanka’ by Dr Martin Hirst, Associate Professor of Journalism, AUT University & ‘Slow Genocide’ by Professor
Post a Comment
Read more

Iran: a new left is emerging on the campuses

There have been major confrontations over the last month between students and Iranian security forces. Iranian socialist Behzad of the Iranian Marxist journal Saamaan No (New Order) spoke out about the new left wing movement rising in Iranian universities. ‘For students in Iran 7 December is an important date. It was on this day in 1953 that students staged mass protests in the University of Tehran at the visit of then US vice-president Richard Nixon. Nixon was visiting the Shah (the king of Iran) to congratulate him on the coup that toppled the popular nationalist government of Mohammed Mossadeq. This was a US and British backed coup, and although they got rid of Mossadeq, it did not crush the movement that brought him to power. The Shah’s security forces fired on the student demonstration, killing three. Since then this date has became a celebration of resistance to dictatorship and the struggle for freedom. Following the 1953 protests, Iranian students formed the Confederatio
Post a Comment
Read more

Iran repression: a regime in crisis

- June 24, 2009
Battle w/ Police - Tehran, Iran - June 20th 2009 Uploaded by mightier-than . - Up-to-the minute news videos. by Simon Assaf Iran is in the grip of a popular rebellion, the like of which has not been seen since the 1979 revolution. It began as a protest against alleged vote rigging, but has now become a movement that lays bare the deep contradictions inside Iranian society. There have been four crucial days in the uprising so far. On Saturday 13 June, the day after the presidential elections, tens of thousands of people spilled onto the streets of Tehran to protest at suspected election fraud. These protests spread rapidly to other cites. The Basaji militia loyal to president Mahmoud Ahmadinejad, who was declared the winner of the elections, moved to crush the protests. They raided Tehran University, the centre of the reform movement. Five students are believed to have been killed. Similar raids took place at other universities. Yet far from this taming the movement, it grew.
Post a Comment
Read more

A tale of two referenda- Hit Poverty, not Kids.

Over 200 worksite delegates from Unite union gathered in Mount Albert last Thursday to launch a campaign that promises to see some of the passion and colour of its SupersizeMyPay fight re-ignite on the national stage. Unite is now collecting signatures for a Citizens Initiated referendum to raise the minimum wage to $15ph immediately, and then by steps until it reaches two thirds of the average industrial wage. The campaign was endorsed at the meeting by the candidates for the Labour and Green parties, as well as Darien Fenton of the SFWU, but the real outstanding speeches came from the delegates themselves , all of whom are struggling to make ends meet on low wages. Socialist Aotearoa organisers and delegates within Unite will be doing our part to build a massive united front that takes the $15ph petition to the streets. If you want to do a stall in your workplace, community or campus, please contact us at 021 186 1450 .
Post a Comment
Read more

Irish Marxist Joe Higgins takes Dublin Euro seat off governing party Fianna Fail The local elections in Ireland have seen the governing Fianna Fail party and their Green Party coalition partners massacred, as voters use the ballot box to exact revenge on a government that has been attacking workers conditions and slashing public services. With over 400,000 workers now unemployed in a country with the same population as Aotearoa, the economic crisis has now come home to rout the Neo-Liberals in the ballot boxes. Fianna Fail has been the biggest party in Ireland since the 1930s, but now sees its national vote fall to the low 20%s. The Irish Greens betrayed their principles around military neutrality, ownership of natural resources and even motorway building, and have lost heavily in all areas where they held council seats. The experience of the Alliance party in coalition with NZ Labour in 2001 shows the danger of small left wing parties being swallowed up and destroyed by the polic
Post a Comment
Read more

Marching Against the Motorway

"John Key! Hear us say! We don't want your motorway!" Over 300 local residents marched along the proposed route of the SH20 Motorway extension in Auckland, braving the wind, rain and an over zealous police force intent on pushing people onto footpaths so sacrosanct traffic could flow unabated. Spirits were high on the march, as the chants of "Who's streets? Our streets! Who's homes? Our Homes!" echoed down the roads of Waterview, Hendon Ave and Owairaka. Locals were joined by activists from Socialist Aotearoa, the Unite union, the Greens and the Labour party, and there was a lot of talk about direct action and escalating the campaign to the next level. TVNZ News video HERE
Post a Comment
Read more

Twenty years ago China’s autocratic regime cracked down on a democracy movement that swept the country. Matthew Cookson looks at the legacy of Tiananmen Square The image of a single defiant protester halting a convoy of tanks captured the imagination of millions of people around the world 20 years ago. This lone man facing down the immense power of the army has come to represent the Tiananmen Square uprising of June 1989. It shook China’s rulers to the core. Those at the top managed to put down the revolt using the utmost brutality. But they have failed to suppress its inspirational story or to deal with the issues that lay behind the protests, and that continue to spark resistance in China today. Many commentators claim that the 1989 uprising was a movement against Communism and in favour of free market reforms. In fact millions of people took to the streets of China to challenge the corrupt state bureaucracy and its turn to the world market. The Chinese Communists, led by Mao
Post a Comment
Read more
More posts