Five Fingers for a Fist: Founding Principles of Socialist Aotearoa 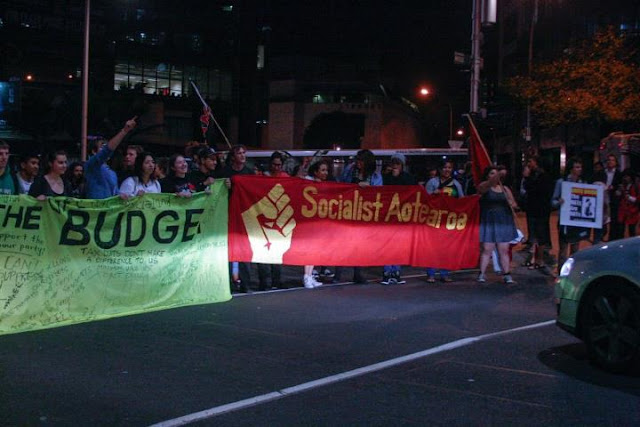 Socialist Aotearoa is a revolutionary, socialist, anti capitalist group. We fight for socialism from below, system change not climate change, and Rosa Luxemburg's battle cry that "Revolutionaries are those who fight the hardest for reforms in the here and now!".

2. Workers of the World, Unite.


Socialist Aotearoa is an international socialist group. We oppose all imperialist wars and occupations, and support all genuine national liberation struggles for independence. We demand the immediate withdrawal of New Zealand colonial troops from Afghanistan and the Pacific. We support the struggle for Tino Rangatiratanga and self determination for Maori in Aotearoa, fully aware of the bloody history of the New Zealand state's past and the dispossession of Maori today. We welcome refugees and immigrants to Aotearoa, and fight against racism wherever we find it.

We oppose all oppressions based on race, gender, sexuality and religion.

Socialist Aotearoa will co-operate with other left wing parties, unions and movements, but maintain its organisational independence and state it's politics honestly and openly. We will work in United Fronts, but reserve the right to publish and contribute our own socialist ideas within them.

5. For a Rank and File network within the Trade Union movement.

The working class movement is the force we believe will change the world. As demonstrated by general strikes and revolutions throughout the decades, it has the power to shut down the system and replace it with a better world based on sharing and direct democracy. As such, Socialist Aotearoa members are active in our unions as volunteers, members, delegates and organisers.

We are with the Union leaders when they fight, but believe that union bureaucracy acts as a negotiating layer between the workers and the bosses. In order to counteract the influence of the Labour Party's union bosses , rank and file union members and delegates must organise a cross-union, cross-industry network of solidarity and struggle.