We shall not be moved. 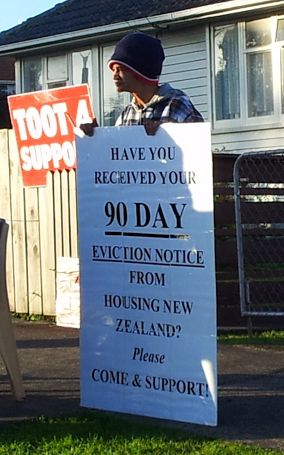 Ioela Rauti known by her friends as Niki, is a member of the Tamaki Housing Group, which has been fighting the good fight for all Housing New Zealand (HNZ) tenants, who do not want to be moved out of their HNZ homes. Once the TRC (Tamaki Re-developement Company) set foot in Glen Innes, their mission was to transform this community into their vision without consultation from the very people living there. The community never agreed to this transformation. They do not want to be moved out of the homes that have housed them for many years.

Niki, along with some support people met with HNZ staff who were only interested in giving Niki her 90 day eviction notice, and to get her to sign a new agreement document. She chose not to sign and made her intention quite clear to HNZ that; “SHE WILL NOT BE MOVED”. Niki's eviction notice had a date of 12 of August and on this day she would have to vacate her home of 21 years.

TIME TO AMP UP THE ACTION

From day one, Niki and her supporters, protested outside Niki's house twice a day 7am to 9am, and 3.30pm to 5pm as these were peak traffic hours. On both sides of the road were large readable protest statements along the fences. Propped up by a tree on the berm was a blackboard which showed how many days were left out of the 90 days before what we called D-day; the eviction, would happen. We did this every day without fail and sometimes in wet, cold and rainy weather. The only comforting thing during the bad weather, would have to of been the toots of support from the passing cars, and the words of encouragement from pedestrians walking by. This gave us hope and the strength to carry on. We shared some life stories whilst out on the front line. These gave me an insight into just how much integrity and Mana this woman has. We must win this at all costs.

With each passing day the thought of an eviction was becoming quite daunting to say the least. Looking at the signs “Evict John Key Not Me”, “Stop Bullying the elderly”, and “Developers Out”, as well as being able to take in the beautiful water views (the reason why Niki had to leave her home), certainly highlighted the injustice of what was happening in Glen Innes. This too made our resolve to Stand up and fight back even more necessary. 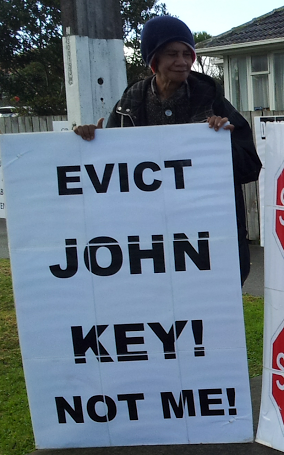 On July the 2nd, after 47 days straight and with only 43 days left to go, Niki received a letter from HNZ that there is now a variation to her eviction notice. She has been given another 7 months in her home. Absolute joy, relief and cheers of accomplishment were echoed from everyone once this news spread. What happened? And why had HNZ suddenly relented. Who cared? not us right now, we had a major WIN. The grass roots had taken it to the streets and WON, albeit a minor win, but a win none the less. More than likely John Key and his National caucus didn't want such a fuss going on leading up to and during the general election, or maybe he had heard that a lot of the toots of support were coming not from HNZ tenants, but people who could afford to drive very expensive cars. Who knows aye.

Well first off getting some much needed rest. The smile on all our faces is a sure sign that what we are doing can surely be used as a template for all HNZ tenants that wish to fight back. What has just transpired has indeed lifted the morale of all of us here in Glen Innes. We are not stopping, but will continue to protest, have meetings to gather more support, hold marches and support other grass root actions where the people are standing together, united in their effort to make a change. We are taking it to the streets and letting this National led government know, WE SHALL NOT BE MOVED!

We would like to take this opportunity to thank everyone who has helped support our housing struggle here in Glen Innes. 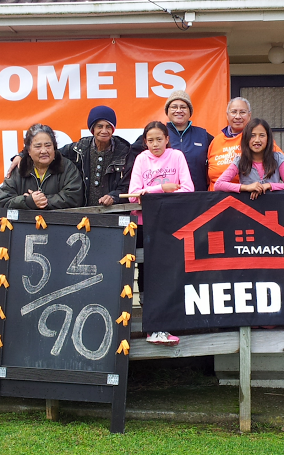