Over 300 residents in Mangere went home encouraged and ready to fight a proposed motorway every step of the way from a rally in South Auckland today.

Residents of the South Auckland community of Mangere, inspired by Mana Movement local government candidates, have today established Respect Our Community, a group to organise resistance against the proposed Option Four of an East to West motorway through South Auckland and on the Saturday 5 October called a public meeting at Sutton Park school in Mangere East. The venue was symbolic as this is one of the three schools that the new motorway would cut through. This may result in anything from the loss of a large portion of the school fields to the demolition of the entire school. Because of this the school opened up the hall free of charge to the Respect Our Community campaign.

Among the speakers at the packed meeting were representatives from three political parties as well as local board members and local Labour MP Su'a William Sio. The local board members were insistent that due process had to be followed and that the community should not get involved until the local board had done all they could to stop the motorway while Su’a William Sio said he hoped that residents got decent prices for their properties if the motorway was constructed. However members of this strongly working-class community were forthright in calling for protest action to be taken as soon as possible emphasising the importance of making a stand against the new motorway before Auckland Transport has chosen their preferred option, due to be announced early next year. Another concern raised at the meeting was the proximity of the motorway to local child care centres and the impacts of the pollution on the children of the Mangere community.

At the end of the meeting a resolution to oppose Option 4 publicly was drafted by Respect Our Community chair Roger Fowler. This was later amended, by a proposal from a local, to a resolution to oppose the East-West link regardless of its form. As well as this a petition has been provided to be circulated amongst the Mangere community to be returned before November the 5th. 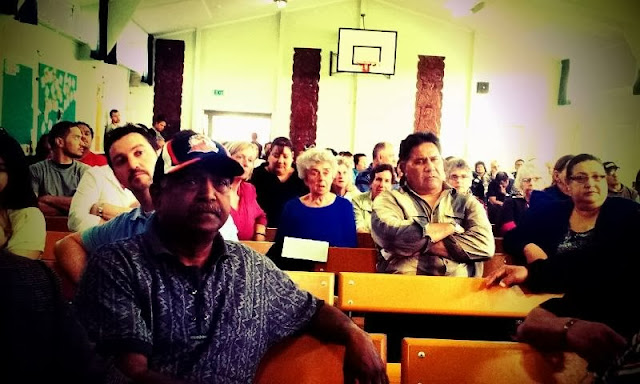