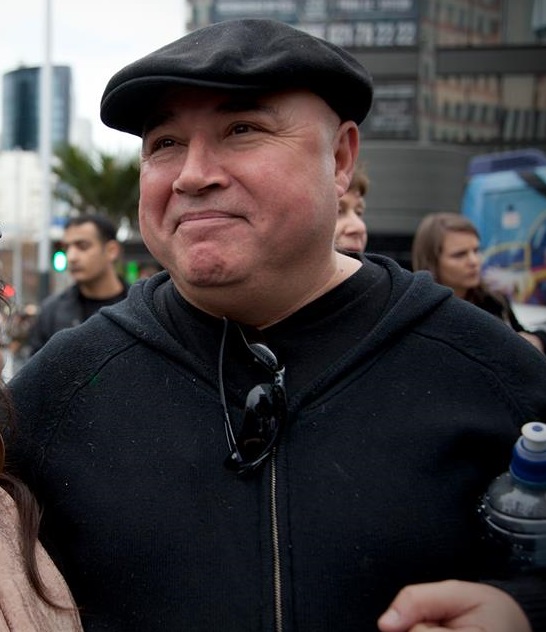 On Saturday night Auckland's Chilean community held a cultural night of poetry and music in Onehunga to mark forty years since the overthrow of Salvador Allende's Popular Unity government. This is the speech given by Esteban Espinoza, one of those dissidents forced into exile in Aotearoa after the coup.

Forty years ago the world was a different place, or wasn't it? The US was trying to monopolise its global power in a constant struggle with the socialist camp.

In Chile, having elected for first time a Marxist socialist President, Salvador Allende, the US government, the transnational companies and the CIA conspired from even before Allende was elected to abort his taking the government.

Allende had offered Chile a new road to a liberal socialist revolution without violence which was going to transform the basis of the capitalist society with a reformist programme.

Most of his programme was achieved within the first year of his government while Nixon and his criminal cartel bribed elements in the Chilean Employers association to initiate strikes to bring down the government and accumulate forces. They lobbied the judicial power, the Media, influenced the church and the political parties who were not in the UP and finally infiltrated the armed forces.

In 1972 this exercise in subversion had successfully created chaos and deepening the division of Chileans but was not breaking the enthusiasm of the poor and the working class in the hopes presented by the Popular unity government.

In fact in the parliamentary elections of March 1973 and despite all the US efforts, Allende’s government and the parties of the Popular Unity obtained a significant growth in their support.

The details were been finalised, the list of the victims were completed and in Sept 1973 with the direct assistance of the US Navy, the Chilean armed forces launched a mighty attack against the President and his supporters subjecting Chile to the worst chapter in its history.

The President loyal to his oath of representing the aspirations of the majority of Chileans and consistent to its promise of dying before surrendering to the enemies of Chile, died in the fighting that followed the coup. For first time the government palace was burned to the ground, supporters of a democratically elected government imprisoned, assassinated, tortured and persecuted not just in Chile but outside the borders of the country as well.

A machinery of death was put into motion, Pinochet the criminal Head of the Army ,created an organisation whose only purpose was to execute and torture opponents to the newly US blessed regime.

The DINA and later CNI went to barbaric extremes to achieve the so call” social peace” which the neoliberal Taliban’s of Harvard and Chicago needed to use Chile as a punishment ground and as an experiment of their economical counter-revolution.

Thousands disappeared ( the official figure is 3,600 but this is much higher) the executed and assassinated could have reached the 30,000. More then 250,000 were tortured, more than a million Chileans fled to exile, some to Aotearoa NZ.

Today we are beginning to tell and listen the horror stories of the Chilean holocaust. The culprits in Washington have remained quiet and clearly unrepentant, the Chilean accomplices, the right wing parties and the Christian democrats have all but washed their hands of the blood of Chileans.

Today the struggles remain if not the same even more urgent. The challenge to Chilean future is how to rid itself of the Pinochet legacy, how to deconstruct a society sick from the inside and to recover a true democratic path for the country.

We want to thanks all those good people around the world and in New Zealand who stood alongside the Chileans and demanded an end to the brutality and the repression. Your solidarity did make a difference.

For our dead ones, our disappeared ones, our tortured ones, our exiles, our displaced, there will be no forgetting or forgiveness until all truth is revealed and all culprits punished. 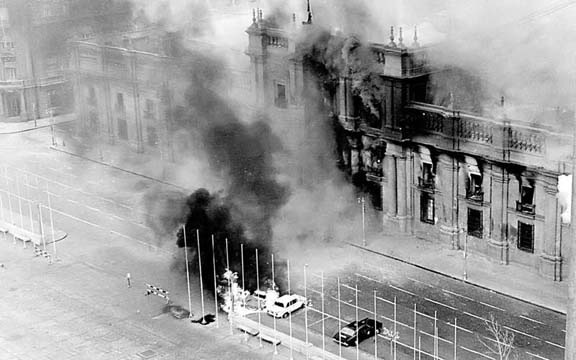 Chile's presidential palace was bombed by the Chilean Air Force during the coup.
Chile Solidarity