Dirty Wars - The world is a battlefield 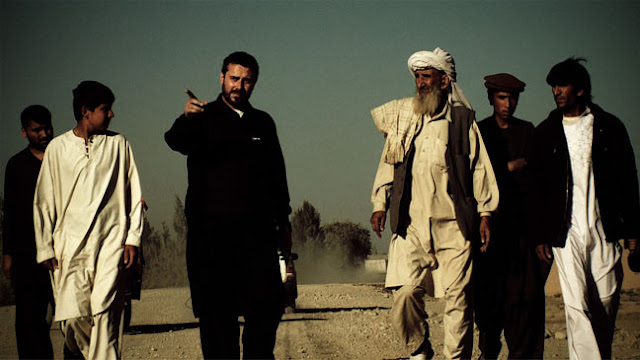 Investigative journalist Jeremy Scahill's film Dirty Wars is an extraordinary and emotional journey behind the scenes of the US empire's war on terror.

The film's subject - the secret US wars against Al-Qaeda - draws Scahill across the world. The film spans special forces operations in Afghanistan, drones strikes in Yemen, US-backed mercenaries in Somalia, press conferences at the White House, Senate intelligence committee hearings, and interviews with former military and intelligence operators.

One can't help but think Scahill himself, looks like a bit of a badass journo, as the beautifully shot film follows him into the badlands of Afghanistan, the hospitals of Mogadishu and tea houses of Aden. There he is strapping on a bulletproof vest and accompanied by a ute full of armed Somali's rolling in Mogadishu. There he is holding hands with a tribal leader in Yemen at the site of a cruise missile attack. There he is in Brooklyn buying yogurt and pinning stuff on his office walls.

The three episodes of violence Scahill focuses on are a 2010 murder of five people in Afghanistan in 2010 by US special forces and its attempted cover up, the murder of over 40 people (14 women, 21 children) at the Yemeni village of al-Majalah in 2009 and the assassination by drone in Yemen of two US citizens Anwar Al-Awlaki and his 16 year old son. Scahill meets the victims of each attack and pieces together what actually happened beyond the Pentagon propaganda. Viewing the wreckage of just one of these incidents will make your blood run cold. But when Scahill explains how these three fit together into US imperialism's endless global war machine is truly chilling.

As the film follows the footprints of US imperialism around the planet it also lays out how under President Obama, US secret forces missions and drone strikes have spread around the world as the "kill lists" of the Pentagon expand at an ever increasing rate. These lists drive the imperialists around the world in search of enemies. But as one US soldier explained in the film yesterday's collateral damage is tomorrow's insurgent.

The film is really just a taste of the goodies that are in Scahill's book of the same name, which along with documenting the extrajudicial killings of the Obama administration around the world, places the secret wars within their historical context and fleshes out how the Joint Special Operations Command is turning the world into a battlefield.

Scahill's main question posed at the end of this film is how does a war like this ever end? It's a bloody good question.