The Ghost of Harry Findlay 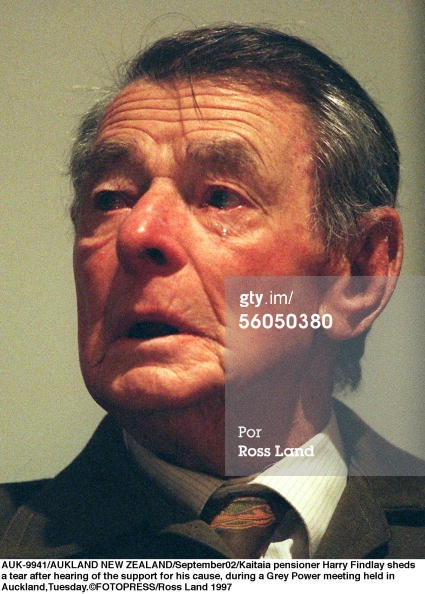 In 1996 a Kaitaia man called Harry Findlay took a stand against the National Government's income and asset testing policy for elderly people receiving long-stay care in public hospitals. Harry refused to pay a $56,000 bill to Kaitaia Hospital for the treatment of his Alzheimer's suffering wife Ila .

Harry's stand came to symbolise all that was rottern about income and asset testing of elderly patients in public hospitals.

A history of asset stripping
On 1 July 1993 the National Government brought in for the first time income and asset testing, referred to by most pensioners as 'asset stripping', for those elderly requiring care in public hospitals. If you were a single elderly person in care the public hospital system could bill you for treatment if you had anything more than $6500 in cash assets left (including your family home). If you were a married couple and one of you was in care the threshold was $20,000 (it excluded your family home).

It was one of the most ghastly forms of inter-generational theft this country had even seen - the theft of millions of dollars of assets off the working class families of the elderly, many Second World War veterans, unable to hide their homes and savings behind the trusts used by the upper middle class. The theft of these men and women's assets made possible National's policies of tax cuts to the ruling class and wealthy of all ages in the 1990s. It was, the Human Rights Commission said, a form of discrimination against the aged.

Harry had already paid the hospital, which had been corporatised into a Crown Health Enterprise (CHE) called Northland Health when area health boards were abolished, $21,000 for Ila's care.  Harry's refusal to pay  any more of the$600 per week hospital bill was a direct act of resistance to National's attack on working class pensioners. The Grey Power movement and his local Far North community rallied around him. A banner read 'Hang in there Harry!' during a protest march in Kaitaia in 1996. The CHE backed off in the face of Harry's dignified stand, that encouraged the whole country to keep fighting the Nats. Ida died in 1997 and Harry died of cancer in 1998. They had no children and Harry left their money to charities. He was remembered as 'Genuine Far North Hero', for his act of courage.

Zero Budget - Return of the asset strippers
In the late 1990s under public pressure from angry pensioners who filled Town Hall meetings around the country throughout the 1990s asset stripping of long stay public and private hospital patients was promised to be removed. But asset stripping continued. As part of its 1999 election promise to remove income and asset testing of elderly in hospitals and the asset stripping of elderly in private rest homes the Labour Party in 2004 began to progressively raise the threshold at which asset testing kicked in at $10,000 per year from where it was then - $45,000. This was to continue until 2025.

But as part of the 'zero budget' announced this year Bill English changed the rate at which this threshold increases from $10,000 per year to the Consumer Price Index. That means that this year the threshold rose by $3000 and according to Grey Power's President Roy Reid, in three years will be $25,000 less than what it would have been under the old rules. This will affect 170 rest home residents whom the Government will be ripping off this year to the tune of $4.5 million.

As Labour MP Annette King pointed out in the Parliamentary debate over this, 'Guess how much is going into VIP limos? There is $8.2 million for the big limos. I am going to say they are taking the money off the old people so that they can have their BMWs. That is what it means—take it off the old people so that Government members can pay $8.2 million for their limousines to drive around in.'

National has revived the attack on working class pensioners and their families. When the poor old people are forced into rest home care at the end of their lives the state steals their assets, under the excuse of austerity and "balancing the books", while the super rich get tax cuts and the so the politicians get limousines.

This National Government and their return to asset stripping the close-to-death elderly make John Key and Bill English no better than grave robbers. The Tories cemetery-gate theft of pensioners assets revives the ghost of Harry Findlay and the spirit of his resistance. Uncompromisingly staunch he fought the neo-liberal attacks on the working class elderly and won. This working class hero of the 1990s should inspire all of us to fight on until the cold hearted Nats are dragged out of the beehive.