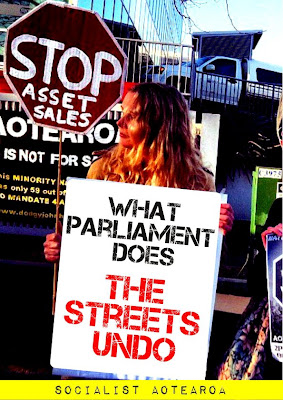 Twelve protests are planned across Aotearoa for 14 July against National's privatisation and corporatisation programme.

Thirty protesters auctioned off John Key's mansion this afternoon as street theatre and creative opposition spreads. There is continuing pressure in the courts from Iwi after a landmark Supreme Court decision that the Crown does not own the riverbeds on which the dams of the hydropower schemes sit and does not own the water that flows through their turbines.

The national day of action against the theft of assets has been endorsed by Helen Kelly for the Council of Trade Unions, Phil Twyford for the Labour Party, the Green Party, Hone Harawira for the Mana Movement.

The protests are also endorsed by We Are the University (Auckland), Unite Union, the EPMU, the Public Service Association, the Service and Food Workers Union, the Maritime Union of New Zealand, New Zealand Nurses Organisation, Equity, Citizens Against Privatisation and Socialist Aotearoa.

The following weekend a student protest is planned to coincide with the National Party conference at Skycity Casino.

You can help build the fightback: