Teachers' strikes would inspire us all 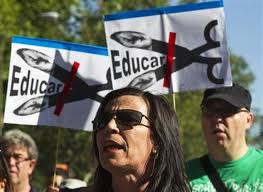 This winter strikes by teachers in defence of quality, public education could break the National Government and their attacks on youth and education.

How appropriate it would be to see this greedy government humiliated and smashed by education unions and those guardians of childrens' future - teachers. After all the Nats have done to education it would be a beautiful sight to see the Coalition finally splinter under pressure from education unions. But already the Rats are backpedaling as principals and teachers line up strike action in school after school across Aotearoa. They know the teachers will win a fight and they're eager not to lose another confrontation after the debacle of National Standards.

In the news over the last four years have been the repeated cuts to education funding and attacks on public education – night classes, kohanga reo, playcentre, cutting the education training incentive for DPB recipients, National Standards and now the cuts to student allowances.

A teachers strike would inspire us all. It would show the technocrats in Treasury who really runs this country and who has the power to shut it down. It would show other groups attacked in the budget - university students, pensioners and child workers - that the Nats austerity budget can be broken. It would show other workers that they need to have a go! There's no point waiting around for things to get better. A Government relying on the support of the corrupt John Banks for its support doesn't care about this country. This Government is for the rich and by the rich. School strikes can bring it to its knees.