Stay in the streets 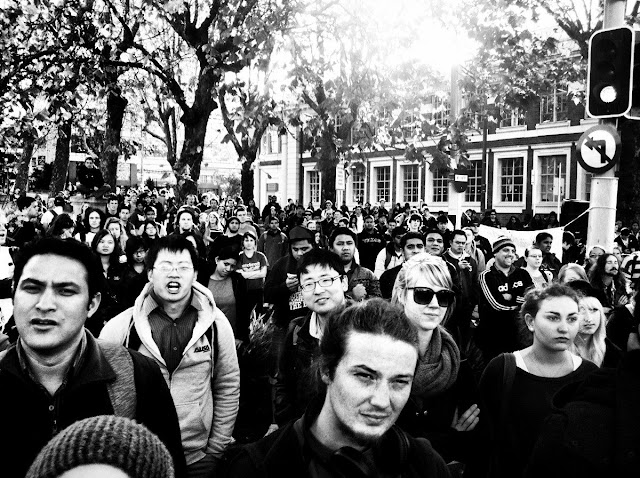 The National, Act, Maori Party coalition is under pressure. On the streets they are increasingly feeling the heat over their new attacks on the working class, students and the environment.

It is clear that the mood of frustration and anger at asset sales seen in the  Aotearoa is Not for Sale hikoi and the protests in Te Ika a Maui along the route have spilled over into an increased confidence to challenge the National Party and corporate interests.

Iwi are increasingly taking a more assertive approach to fighting fracking, mining and oil drilling. In the far north Ngati Kahu have said they will use 'reasonable force' to remove mining prospectors. Hapu in Taranaki are coming into increasing conflict with Shell Oil over fracking. Dayle Takitimu of East Cape iwi Te Whanau a Apanui told the Aotearoa is Not for Sale hikoi in Wellington 'Our resistance will not stop here. There will be no drilling on the coast... This is the time for the uprising!'. Iwi from Kaipara harbour are prepared to defend the ecologically sensitive area where Maui's dolphin live from turbines.

An intervention by iwi leaders in the AFFCO dispute has seen a partial victory for 900 meat workers locked out for 12 weeks by the arch-capitalist, Talley's family. The resilience of union members, their families and the mobilisation of rural communities and iwi in defense of these workers was key to stopping the attack on wages and conditions but also the deunionisation of this industry. The SFWU has launched a Living Wage Campaign and this shows there is a growing sense amongst some union leaders that more needs to be done to fight low wages.

In Glen Innes there has been a number of vicious street battles in the night between police removing state houses and local protesters. It now requires a major operation of scores of police to escort trucks carrying the houses out of the neighbourhood. It is becoming increasingly unlikely that the empty sections will be sold as community resistance builds and still many tenants are refusing to leave their homes.

Student activists led a well organised, militant, protest against the budget on Thursday and over four hundred blocked a key arterial route for over six hours. This student strike has catalysed plans to develop a fightback especially from post-graduate and medical students most affected by the cuts.

Auckland Action Against Poverty's stormy picket of a speech by John Key to the 1% at the Langham Hotel has kept the rising levels of unemployment and poverty on the public agenda and the government looks like it is under siege.

The Mana Movement has been at the core of all of these struggles and from the provincial towns of the Bay of Plenty to the inner-cities of Auckland and Wellington, Mana has shown itself as an important unifying force binding unionists, socialists, students and Maori and allowing effective resistance. Mana is the party of the social movements and it can expect its support to grow in the next few months, especially as the jailing of Tame Iti and Rangi Kemara, will harden more Maori opinion against the Government.

The protests and resistance is having an effect. The polls show support for National has dropped to 44.5% and if an election was held today a Labour, Green, NZ First coalition would find it easiest to form a Government. With a weak and divided Labour Party support for an activist and energetic Green Party has grown to 15%. The public is shifting left and the far-right Act Party is now as good as dead.

The key political argument right now is to maintain the mobilisation in the streets through the Winter months and also to broaden the scope of organising against the austerity policies being pushed through. If the political will is there a broad coalition around Aotearoa is Not for Sale could lead a national day of action against National's attacks and marching for an alternative drawing in environmentalists, the CTU over new attacks on unions, students facing allowance cuts, pensioners facing higher prescription charges and educations unions facing over a thousand redundancies.

People are fighting back and resisting all over the place but there remains the potential to draw in thousands more students and workers in mass actions. We need to be encouraging workers and students to take part in political action as much as they can. The attacks are only going to increase as the global economic crisis deepens and we must remind working people of  the obligation of solidarity at the heart of Paulo Freire's words, 'Washing one's hands of the conflict between the powerful and the powerless means to side with the powerful, not to be neutral.' At times of extreme crisis the challenge to those who stand on the sidelines is to state that they're either with the movements fighting for a new Aotearoa of justice and liberation or standing with the Government and its oppression, exploitation and poverty. There is no middle ground, you can't be neutral on a moving train.

We can point to the many global examples of resistance such as the struggle by students in Quebec and draw lessons from their experience.  As one of their activists said recently the global challenge is to, "Build on the popular discontent that you have built on before with the Occupy movements for instance and build broader mass movements to direct contradict the rise of neo-liberalism."

This is an important time for revolutionaries as hundreds of millions of people engage in movements challenging capitalism and the 1% around the world. Revolutionaries must work with all those battling austerity and fighting for the environment but at the same time argue for a revolutionary, socialist alternative to capitalism and convince people of the necessity of building that alternative from below in workplaces, communities and campuses.

Bill English has encouraged anti-austerity protesters in Auckland to look to Greece for inspiration. We agree that Greek workers and students are showing the way but the inspiring lessons of the revolt against bankers are not so much in the petrol bombs hurled during demonstrations but in the mushrooming of workers' struggles against the bankers including occupations and worker's control. This didn't happen altogether spontaneously though. The revolutionary left including Antarsya has convinced a significant chunk of the working class that the solution to austerity lies not in elections but in ongoing workers' struggle and ultimately workers' power - “No one wants to be governed like before,” says Costas Katarachias, a doctor and union rep at Agios Savvas cancer hospital in Athens.

The barbarity of capitalism lies exposed for all to see on a global scale. We need to unite to maintain the fight and build out the resistance against National over the Winter months. We also need to win workers to a revolutionary, socialist alternative to the deepening economic and environmental crisis we face.