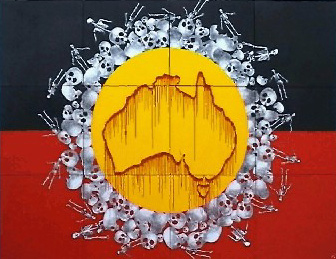 A world of glitz and glamour, parties and pads, models and money is how Australia's Gold Coast is being presented in the new reality programme from TV3.

The show has already attracted record levels of criticism from the public over its portrayal of young Maori and its aping of American shows like Jersey Shore. Some however think that The GC portrays Maori success on a global stage at a time when Maori are doing it pretty tough in Aotearoa. Many have pointed out the substantial cost to the public for a television show about twenty-something year olds getting drunk when TVNZ7 and all its political and current affairs programming is falling victim to the National/Act austerity knife. It is a debate which looks set to polarise television viewers in the coming weeks.

Yet behind the shots of party going clubs and bars, the golden, sandy beaches and sparkling, white apartment blocks lies the real Gold Coast. Behind the flash cars and expensive drinks is an Australian state which has inflicted on indigenous Australians a genocidal colonisation and continues to inflict an apartheid state.

On the Gold Coast the clans of the Yugambeh people were systematically pushed off their lands they had lived in for more than 23,000 years.

To ignore the plight of Aboriginal people in Queensland is a blow to the solidarity between oppressed nations of all countries.


Systemic racism exists on all levels of capitalist society and this contributes to the cycle of violence and crime. Despite a drop in crime over the past decade, incarceration rates and deaths in custody have increased dramatically. Aboriginal teenagers are 28 times more likely to be thrown in jail.

The number of jailed Aboriginal people aged between 10 and 17 rose by more than 20% in 2010. Deaths in custody have risen by about half over the past 10 years in Queensland and New South Wales.

The Australian Bureau of statistics said that last year the total prisoner population dropped by 2%, but the number of Aboriginal prisoners rose by 1%. And despite Aboriginal people making up only 2.5% of Australians, one-in-four prisoners are Aboriginal. Read More


On November 16, a 12-year-old Aboriginal boy appeared in court charged with receiving a Freddo Frog chocolate bar from a friend who had allegedly taken it from a supermarket. The supermarket did not seek prosecution. Only the international headlines forced the police to drop the case.
Two-thirds of Aboriginal children who have contact with the police are jailed; two-thirds of white children are cautioned. A young Aboriginal man was jailed for a year for stealing $20 worth of biscuits and soft drinks. Read More


BRISBANE, June 14, 2007: Queensland's Indigenous people and the homeless suffer high levels of police harassment, according to a report by legal and community groups.

Commissioned by a coalition of legal organisations including the Queensland Council of Social Service (QCOSS) and community groups such as the Red Cross, the No Vagrancy report calls for a number of investigations into allegations police persecute the socially vulnerable. Read More


Between 1940 and 1969 an estimated 5600 children were removed in NSW alone, while in Queensland the figure has been estimated between 30% and 40% of Aboriginal children. In return for becoming "just like white people", Aborigines were expected to be grateful and obedient. Read More


1857 - Massacre of the Yeeman. In the early hours of the 27 October 1857, members of the Yeeman tribe attacked the Fraser's Hornet Bank Station in the Dawson River Basin in Queensland (the Hornet Bank massacre) killing 11 people in retaliation for the deaths of 12 members shot for spearing some cattle and the deaths of another a group of Yeeman nine months earlier who had been given strychnine laced Christmas puddings. Following the deaths of his parents and siblings, William Fraser, who had been away on business, began a campaign of extermination that eventually saw the extinction of the Yeeman tribe and language group. Fraser is credited with killing more than 100 members of the tribe with many more killed by sympathetic squatters and policemen. Many of the killings were carried out in public such as the killing of two Yeeman charged with the Fraser murders whom Fraser shot in the courthouse as they were leaving following verdicts of not guilty, the alleged killing of two Aboriginal people in the main street of Rockhampton and the killing of a strapper at a Toowoomba race meeting. By March 1858 up to 300 Yeeman had been killed. Public and police sympathy for Fraser was so high that he was never arrested for any of the killings and gained a reputation as a folk hero throughout Queensland. Read More

It was profits from cattle rather than wool which saw the Aboriginal people of the north destroyed or enslaved. Typical was Frank Jardine, sponsored by the Queensland government to drive cattle up to Cape York in 1864. Jardine claimed to have personally killed 47 people on this trip, each one marked by a notch on his carbine rifle. The total death toll was over 200. Read More.


As the 20th century dawned, the last remaining areas of Aboriginal land were being penetrated as the pastoral industry, which formed the backbone of the early Australian economy, expanded. Aboriginal people were being forced onto reserves, which effectively became open-air prisons as the colonies passed a series of "Protection Acts", such as the Aborigines Act in Western Australia and The Aboriginals Protection and the Restriction of the Sale of Opium Act in Queensland. These acts reduced the legal status of those on reserves from British subjects to wards of the state, with members of the Protection Boards as their legal guardians. Read More

jo said…
How can people see the GC as portraying Maori success on a global stage? How is that superficial lifestyle the success we want for our whanau? It is materialistic crap like this that gives our tamariki a false idea of what it means to be successful. Being a good person and looking after your friends, family, community and environment should hold a lot more value than owning flash cars and apartments in another country.
7:00 PM