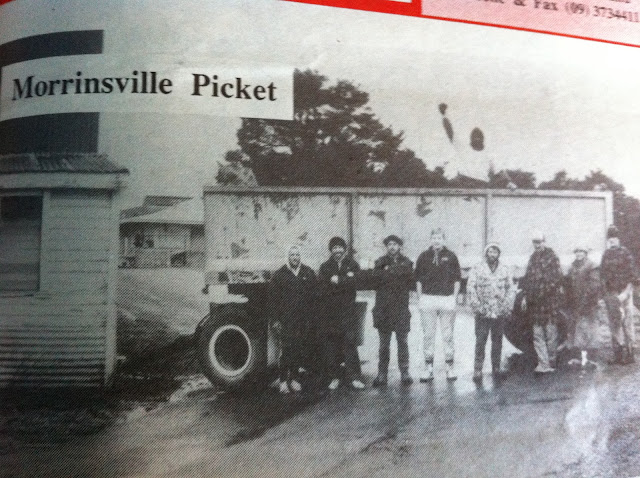 A meat workers picket in Morrinsville in 1992. No scabs came through this line.

Freezing workers must rediscover the direct action tactics that secured the wages and conditions they have now or MWU sheds in AFFCO freezing works up and down the country look set to be smashed and deunionised this Winter.

Escalating fundraising merely prolongs the misery for hundreds of families whose pay packets are under attack. The union movement needs to join together and deal a mighty blow to the employing class attack on workers by taking militant action to defend our collective agreements and unions.

Meat workers need to raise the issue of picket line tactics at shed meetings and vote to start putting Talley's on the back foot. 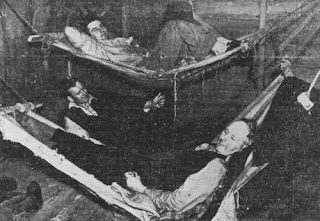 In the back files of the New Zealand Herald of January 14, 1937, there's a photo of a crowd standing and seated round a young Maori. The bloke is strumming a guitar, grinning and singing away. Some of the crowd gathered round are draped in blankets. Some wear hats.

The photo was taken inside the Westfield freezing works, just off the Great South Road at Southdown. The occasion was New Zealand's first stay-in strike. A Labour Government had introduced a 40-hour working week, but freezing workers found they were still doing a 44-hour week without any compensation in pay. When their grievance was rejected by the freezing companies, the men began a go-slow on the job. The response from the companies was to threaten to dismiss the work-force.

The response to this, from the men, was unprecedented in New Zealand industrial history. After attending a morning stop-work meeting, the men returned to work at one in the afternoon. In the evening, a large number went home. But others stayed on in the canteens. By nine o'clock that night practically every man had returned to the works, bringing food and blankets. And then they took over the works. At Westfield, Southdown, Horotiu and the cool stores on King's Wharf, they simply locked themselves in, setting themselves up as occupiers. It made absolute sense. If you strike and walk out, your job can be taken by scab labour. Take over the works lock, stock and barrel and the problem simply doesn't arise. The men put up hammocks in the fellmongery, played cards by candlelight in the canteen and were visited by wives and girlfriends who conversed with them through locked gates.

"Some of the men listened to the gramophone," reported the Herald from the King's Wharf cool stores. "Others played cards or smoked, and many tried to sleep on tables or the floor, using coats or blankets to soften their hard beds. "All were cheerful and seemed unworried by the prospect of spending the night in the works." The freezing companies demanded the police evict the industrial squatters. But the Labour Government, brand-new to office and rooted solidly in the union movement, declined to march in the police.

As the occupation headed into its third day, Tim Armstrong, the Minister of Labour, was sent to Auckland to negotiate a deal. Armstrong was a former miner and union militant. In Auckland, he promised the striking freezing workers they would get justice. The freezing companies, however, were adamant. They would not budge on the matter of the extra hours being worked. They refused to concede either shorter hours or better pay. So Armstrong simply imposed a settlement. He directed the companies to pay the men overtime for every extra hour they worked. The companies could do nothing but obey. The press was furious. At the general election the following year, the Labour Party was returned with an increased majority.

Why do Helen Clark and Michael Cullen kowtow so to business leaders? Wasn't it their first year in office that saw them running off to reassure business leaders nothing untoward was going to happen? Wasn't that Michael Cullen lamenting at the last election about the injustice of business leaders advising a National vote after all Labour had done for them? And now it's the Greens on their knees in front of the Chambers of Commerce. Each year over the past five, business profits have risen by 11 per cent. That's each year. By contrast, over that entire period, wages have risen just over 8 per cent. Directors' fees for this year alone have risen more than 20 per cent while working people work longer hours and get further into debt. Over the past five years the rich have increased their net worth at a greater annual rate than at any time under National.

Meanwhile, according to a Unicef report, we have the fourth-highest child poverty rate of 26 developed countries. It's time to put up the hammocks in the fellmongery and tell business leaders to get stuffed.

They've had their snouts in the trough long enough.

* Dean Parker is an Auckland writer and a signatory to the Workers' Charter initiative. 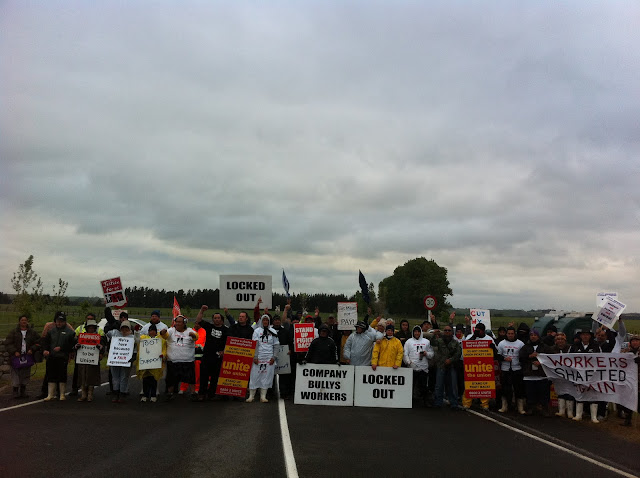 Meat workers in Marton were starved back to work last year. But a permanent blockade keeping out scabs could have stopped the wage cuts.
History Lockouts Strikes Unions