- May 04, 2012
Members of Socialist Aotearoa will join other forces on the left and the union movement to collect signatures for the Keep Our Assets Citizens initiated referendum petition. It is hard to think of any mass movement in the history of this country that has not circulated petitions for its cause. From the unemployed workers in the 1930s to the Save Manapouri Campaign in the 1970s petitions are a useful tool to gain public attention and activate supporters for a cause.

However defeating the National Government and their plans for asset sales, low wages and oil drilling requires more than petitioning and lobbying. It will require a mass movement on the streets, on the seas, around the campuses and in the workplace to directly confront the state and the corporations plans to destroy the environment for profit and gradually erode the cherished welfare state.

Every election which has seen the defeat of a right-wing government in New Zealand history has been on the back of a mass revolt by the public. The struggle of industrial workers and their communities in the 1890 Maritime strike led to the election of the Liberal-Labour Government which passed legislation protecting unions and gave women the right to vote. In 1999 the election of the Labour-Alliance Government came after more than a decade of grassroots opposition in fire stations, hospitals, schools and universities to the rolling back of the welfare state.

The pattern of social change and Parliamentary power both in New Zealand historically and around the world today confirms what the late American historian Howard Zinn wrote about social and economic challenges to corporate power in the capitalist era, ‘If there is going to be change, real change, it will have to work its way from the bottom up, from the people themselves.’

In France Left Party candidate Jean-Luc Melenchon scored 11% in the first round of voting in the presidential election last month. The French left's best electoral result in more than 30 years was led by a firebrand, poetry-loving, former Trotskyist who exhorted supporters to join his citizens insurrection against the super-rich.

"We're back--the France of revolution!" he told a crowd of several thousand in the central French town of Vierzon. "If Europe is a volcano, then France is the revolutionary crater."


Since 2008 financial crash citizens insurrections at the ballot have delivered crippling blows to the plutocrats in Iceland, Canada, Bradford and now in the UK local elections. These left votes came in the wake of anti-austerity movements challenging the free market orthodoxy through strikes, occupations and marches. In Chile and Greece the street movements of anti-neoliberal students and workers are shifting the political landscape and leading public opinion. In an occupied high school in Santiago or workers' council controlled hospital in Athens working people rule. What this demonstrates is that a serious challenge to a Government for the bankers and the finance capitalists will be led from, and won in, the streets.

Never doubt that a mass movement in the streets can defeat a right-wing government and change the world. Indeed, it is the only thing that ever has.

Snapshots of the social struggles of New Zealand history are presented below with the year in which a right-wing government was defeated electorally. 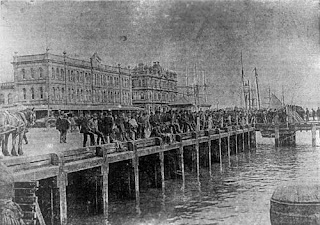 Industrial unionism, 1890
Auckland 1890 -- Lined up along the wharf to prevent cargo being loaded or unloaded, striking watersiders picket the Auckland waterfront during the 1890 maritime strike, the country’s first big nationwide industrial dispute. Together with seafarers and miners, the wharfies were supporting their Australian counterparts, who had gone on strike for the right to form unions. The strike spread across the Tasman when a major New Zealand employer, the Union Steam Ship Company, employed strike-breakers to load its ships in Australia. The army and mounted police were used to control pickets in New Zealand’s main ports. 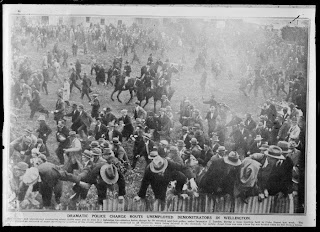 Unemployed workers' movement, 1935
Dunedin 1932 -- A hungry crowd of from 200 to 300 unemployed men, following on the refusal of their demands by the Otago Hospital board, stormed the premises of one of the largest grocery establishments in the city with the intent to victual themselves to the extent to which they considered themselves entitled. (The above picture is of a Wellington unemployed riot) 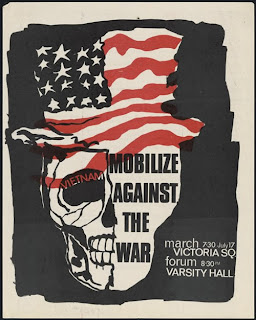 Vietnam anti-war movement, 1972
US bases in NZ, 1970s -- For each of the first three years of the 1970s, there was an annual national protest at one of the bases, all of which were in the South Island – Woodbourne (1971), the US Air Force observatory atop Mt John in the Mackenzie Country (72) and Harewood (73) – the first two are long gone, Harewood is still with us. Owen Wilkes was in the thick of all of them, as they grew progressively more militant. At Mt John, the Police attacked protesters with fists, boots and dogs, with several being bitten and otherwise seriously injured – we retaliated by wrecking the single access road up the mountain, stranding the Americans and the cops. The national backlash against protesters reached hysterical proportions, but equally so was the reaction against the cops (who have never again unleashed dogs onto protesters). In 1973, the Harewood demo was used by the Police as a dry run for that year’s scheduled Springboks tour (which was called off by the Kirk Labour government), and was a fullblown assault by both cops and the military. It was the biggest Police operation against a protest until the forcible end of the Bastion Point occupation in 1978. There were mass arrests, the Police used tactics of systematic violence that weren’t seen again until the 1981 Springbok Tour protests. 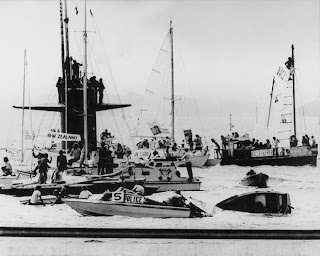 Anti-nuclear movement, 1984
Auckland 1979 -- By the late 1970s opposition to visits by nuclear-armed or -propelled warships to New Zealand ports had grown. The government welcomed the visits from US vessels as part of its ANZUS obligations. Opponents saw them as a symbol of possible nuclear annihilation, and argued that New Zealand should make a moral stand and ban such visits. They launched protest flotillas to 'greet' visiting nuclear warships and hinder their passage into port. This is an Auckland protest against the submarine USS Haddo in January 1979. 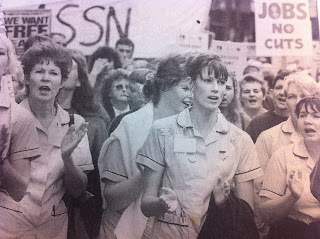 Anti-Rogernomics movement, 1999
Auckland 1997 -- The Auckland nurses Mikayla McKeague and Rebecca Blakemore are fresh to the hospital workforce but are already marching to the beat of intense dissatisfaction. The two members of the nurses' union were yesterday among thousands of people in central Auckland to show their anger at the Government's health policies. (NZH, 12.11.97, p.5.) 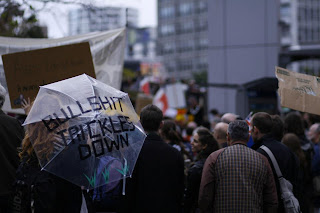 Anti-capitalist movement, 2014?
Auckland 2012 -- About 8000 people marched on central Auckland on Saturday afternoon as opposition grows to the Government's mooted asset sales. A march supporting the 'Aotearoa is not for Sale' hikoi descended on the city shortly after 3pm, heading up Queen St to Aotea Square for a rally.