An interview with Matt Billington aka Myth of Democracy, whose album Humans Piss Me Off is out now on Bandcamp.


What’s your new album all about Matt?

It’s an acoustic, punk rock album. It’s punk rock to me, I don’t give a fuck whatever any other cat calls it. It’s a punk rock album. I’ve tried to capture the spirit of the first punk rock I ever heard which was my friend Craig playing a battered, old, acoustic down at the lake front in Rotorua and writing songs about his friends, and the world and how he felt treated by everything. And it was just this blatant honesty and it was really inspiring. So it’s kind of a homage to that. And hope that I can capture that spirit. It’s a really honest album.

What about the theme, Humans Piss Me Off?

Humans are responsible for a lot of, well all the terrible shit in the world. The title track is based on what I read by an author, Chris Hedges, and it is about, we cannot escape human nature as it is. We have certain impulses we are drawn too. And it is humans and their attempts to control these. And it just can’t be done. We can’t control these impulses. We need to recognise these impulses, recognise human nature and go from there.

Everyone hates motorways but everyone loves motorway overpasses. The overpass is this weird thing where you can feel like you are above the world. You’ve written a song about one. Why?

I worked for ten years in hospitality, every night I would finish work at this pub on Vulcan Lane and I would walk home to Grey Lynn. I would always stop on this overpass. Christ I don’t know the name of the fucking road but I did it for years. I could see towards the North Shore, and see the bridge and see the traffic and it was a still part of the night. I would always invariably think of my friends and where I’ve come from and wonder what they were doing now. One of the themes of the album is love for the people that are around you. That song is just a love song for the people that have influenced me in life. I think about them all the time. There is a lyric in the song, ‘There is much to build, destroy and fight, but don’t forget our time together is finite’. We’ve only got so much time on this earth. You’ve got to enjoy the people around you.

You’ve got another song about late nights, Why Go Home?

It’s very much about just being with people you love. It came from many, many nights just walking drunken home, walking home smashed as, not knowing what’s ahead of you. Just out for fun, looking for something and trying to find it in every place you go to.

Guns, Abuse and Belief is one of the centrepiece songs on the album, is it your favourite?

That song came about when nurses were on strike and John Key stood up and said, ‘Nurses need to live in the real world. There is no money for more pay.’ It comes down to economic priorities. A lot of the political lyrics are traditionalist punk because they are about waking people up from apathy. If you go into the history of punk rock in my favourite albums where talking about why things went wrong and how to change them. There as much an expression of emotion as a political cry. The message that you’re getting from people who control shit, ‘This is how things are and this is the real world’. That song is a response to that. Punk rock for me should be a rallying point for social change. That should be where people get together, we are not in front of the telly, we are out there together, we are all pissed off, we’ve got music to celebrate with. You’ve got that but it has to have the next steps. Where do you take the rage? Where does it go to from here?

How do you think the punk scene is today?

I think punk rock is slowly again waking up to the fact that it has nothing to do with the corporate world and what I’ve noticed in the last few years is that it is getting back to its roots, people putting on their own shows, and it is getting its activism back. We are in an exciting time now because the borders between genres are breaking down. You can see Tourettes playing with Shit Ripper. Punk and hip hop are blurring. 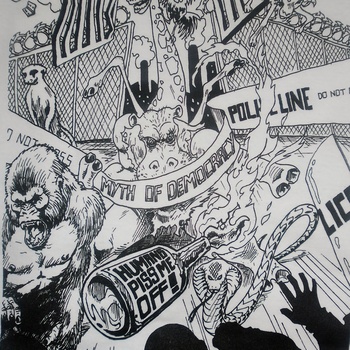 You’ve been described as a modern day Joe Strummer. Playing benefit gigs for striking workers? What’s the link between your music and activism?

My personal political plan for change is that it has to come from below. The bigger picture is important don’t get me wrong, but people need to start taking concrete steps in their own little lives. People say change comes from the individual that’s a little hippy for me. Change has to come from people stepping up and starting to look at the most vulnerable members of society and start standing up for them. At the moment it happens to be locked out meat workers, it is people in Glen Innes losing their homes, it is our homeless situation, people with mental health issues. These are the most vulnerable people in society that the attacks are coming to. And with my music I hope to get people to take more of a humanistic view on the world. I support Socialist Aotearoa because it isn’t all theory, it’s not all talk, it is actually some concrete actions on how we can stop these things happening. Throughout history there are people like that. You look at the Berrigan brothers for example, Philip and Daniel they were a couple of brothers, priests, in America, who went to prison because they busted into a draft office and burnt the draft cards, they went into a nuclear plant and threw paint over the nuclear warheads. They were active. I will support anyone who will support the most vulnerable. When I started doing Myth of Democracy, the plan was to take awesome community organisations like Socialist Aotearoa, like Global Peace and Justice Auckland like the Glen Innes community and take it to the punk shows. So it’s not all lyrics screamed over the mike. So there is a concrete movement people can get involved in.

What next for Myth of Democracy?

I’ve been jumping on the internet and firing off emails. I fly into Seattle in July, I fly a few shows in Canada and then going down the West Coast of the States playing shows in people’s houses and basements. I can’t fucking wait. It’s like going into the belly of the beast.

Listen and download for free or koha at http://mythofdemocracy.bandcamp.com/