Building the resistance after A28 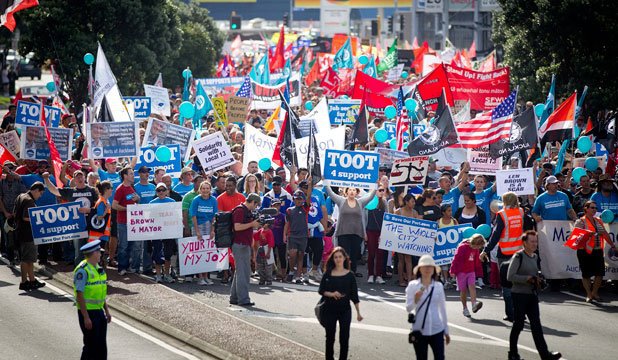 As the Aotearoa is Not for Sale hikoi winds across the North Island we need to keep building the resistance to privatisation of state assets, attacks on workers' rights, deep sea oil drilling and mining conservation land.

The fightback in Aotearoa links locked out meat workers with conservationists, tangata whenua with trade unions, revolutionaries with centre leftists, state house tenants with rural schools and Grey Power with students. This is a fight for all of us against the National Party. The movement started small but is quickly growing. People are taking the initiative to organise actions in provincial towns and on campuses around the country. It's a good start.

We can stop the asset sales, TPPA, oil drilling and farm sales but we are going to need more united action,

• Combined union stopwork protest meetings should be held over Winter to organise and back the Grey Power, Labour and Green Party plan to lead a petition campaign to call for a referendum on asset sales.
• Plans for mass civil disobedience actions at farms/power stations/power companies on the auction block.
• More people out in the streets raising public awareness through stencils, street art, pasting posters and running stalls.
• We need Greens, Mana and Labour to unite to take the message that Aotearoa is Not for Sale out to the cities, suburbs and provincial heartland with public meetings around the country.

From the Crafar farms sell out to John Key's deal with the devil over pokies at SkyCity this country is being transformed into an evil paradise for trans-national corporations day-by-day.

If the Nats are confronted by well-organised campaigns, massive public opposition and civil disobedience they can be beaten.

Between 2008-12 the left scored some remarkable victories; the halt to mining on conservation land, the backdown over ACC privatisation, derailing National Standards and stopping Len Brown from sacking 300 wharfies.

Some union leaders, organisations and MPs are doing a fantastic job fighting the Nats. Some are not doing nearly enough. If union leaders and left MPs aren't doing their job to fight the Government's attacks on workers and our country they need to go. The AFFCO fiasco shows we cannot tolerate incompetence and ineptitude in the union movement anymore.

The left must get organised now to confront privatisation by building a popular movement of resistance.

If the left and unions can't win in the streets now, we won't win at the polls in 2014.