Brown gets his just desserts 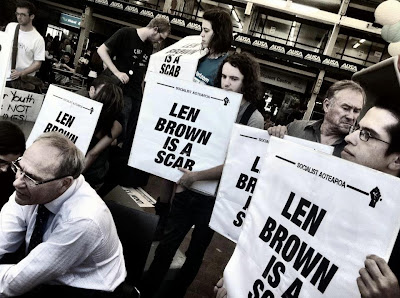 At a “Mayor in the Chair” session at the University of Auckland today, six protestors, mostly students, hit Len Brown with lamingtons. Brown came to the University at 12 noon ostensibly to hear what Aucklanders thought about his administration of Auckland. The Port dispute, that has seen 300 watersider workers left redundant, was unsurprisingly the topic of conversation.
Fifty protestors holding signs waited while wharfies spoke to Brown. However, the audacity Brown showed in pretending to care about the workers and their families during this sit-down was unconscionable. With yells of “whose side are you on” ringing out, protestors unleashed their weapons of pink lamingtons to deliver some of the ridicule and shame Brown deserves.
In Greece, the 2011 protests used “yoghurting” tactics, throwing yoghurt at politicians. The significance of using Greek yoghurt, which has become a staple to many across the world, was not lost, and the practice has gained traction and legitimacy. The lamington has similarly powerful associations for New Zealanders.
The act of throwing food can have serious consequences. Jeremy Olson was charged with fourth-degree assault and disorderly conduct after he threw tomatoes at Sarah Pallin in late 2009. Protestor Maria Jackson expressed her support for those throwing food: “We know people have been arrested for actions like these, so we didn’t take this lightly. The firing of 292 workers yesterday morning has a gravity we couldn’t come close to, but throwing lamingtons is at least better than just a press release.”
The protestors, students and workers united against the disgusting wielding of corporate power against Auckland workers and families, shamed Brown and he left slumped, looking demoralized. If Brown is still confused as to what Aucklanders think about his weak office, perhaps the pink icing on his shirt and head will help him figure it out. If Brown is to come back to campus, as his office claims, he should sort out his priorities and support Aucklanders, not Tory Glibson’s pockets.
-Rosie W, SA
Auckland Direct action Len Brown Strikes Students